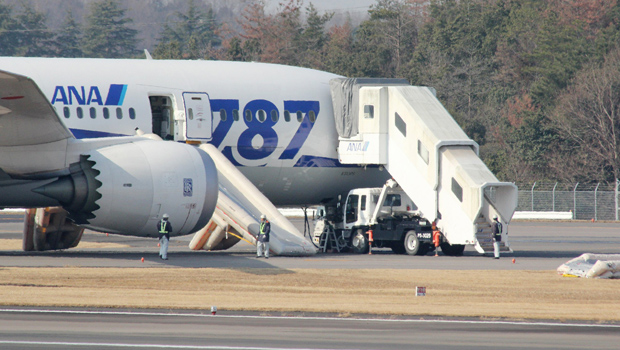 Japan's two biggest airlines and the U.S. aviation agency grounded more than half the Boeing 787s in use around the world after an emergency landing of one of the jets exposed a battery fire risk in the technologically advanced aircraft. Late Wednesday, Air India said Indian regulators have also ordered it to stop flying Boeing 787 aircraft.

The 787 that landed Wednesday had been leaking electrolyte and burn marks were found around the main battery, located in an electrical room below the cockpit, according to All Nippon Airways. The domestic flight landed at Takamatsu airport in western Japan after a cockpit message showed battery problems and a burning smell was detected in the cockpit and cabin.

The 787, known as the Dreamliner, is Boeing's newest jet, and the company is counting heavily on its success. Since its launch after delays of more than three years, the plane has been plagued by a series of problems including a battery fire and fuel leaks. Japan's ANA and Japan Airlines are major customers for the jet and among the first to fly it.

Japan's transport ministry said it received notices from ANA, which operates 17 of the jets, and Japan Airlines, which has seven, that all their 787s would not be flying. The grounding was done voluntarily by the airlines.

"Now that the FAA has said that they want to check (the) electrical system in all the planes we will ground them," Singh told reporters. "How serious is the problem, how long it will take, we'll know only in a couple of days," he said.

The EU followed suit, with the European Aviation Safety Agency ordering all 787s grounded Thursday. At the moment, the only European carrier to fly the plane is Polsh airline LOT.

It's a stunning setback for the plane nicknamed the Dreamliner, which was supposed to set a new standard for jet travel but has been beset for more than a week by one mishap after another. The two episodes involving batteries appear to be the most worrisome yet.

Late Wednesday, Boeing Chairman, President and CEO Jim McNerney said in a statement that he was confident the Dreamliner was safe and that "Boeing deeply regrets the impact that recent events have had on the operating schedules of our customers and the inconvenience to them and their passengers."

In Washington, the Federal Aviation Administration was temporarily requiring U.S. carriers to stop flying 787s. United Airlines has six of the jets and is the only U.S. carrier flying the model, but aviation authorities in other countries usually follow the lead of the country where the manufacturer is based.

CBS News correspondent Sharyl Attkisson reports the Dreamliner is Boeing's first jet to use lithium ion batteries, which are lighter and deliver more power. The FAA ordered special precautions during the plane's developments because of the battery's tendency to overheat.

"We are very sorry to have caused passengers and their family members so much concern," said ANA Senior Executive Vice President Osamu Shinobe.

The earliest manufactured jets of any new aircraft usually have problems and airlines run higher risks in flying them first, said Brendan Sobie, Singapore-based chief analyst at CAPA-Center for Aviation. Since about half the 787 fleet is in Japan, more problems are cropping up there.

"There are always teething problems with new aircraft and airlines often are reluctant to be the launch customer of any new airplanes," Sobie said. "We saw it with other airplane types, like the A380 but the issues with the A380 were different," he said.

Japan's transport ministry categorized Wednesday's problem as a "serious incident" that could have led to an accident, and sent officials for further checks to Takamatsu airport.

Kyodo News agency quoted transport ministry investigator Hideyo Kosugi as saying that electrolyte from the plane's main battery had leaked through the electrical room floor to the exterior of the aircraft.

Boeing, the U.S. National Transportation Safety Board and Federal Aviation Administration were sending representatives to work with the Japanese government on the investigation, NTSB spokeswoman Kelly Nantel said.

It was unclear how long the Dreamliners would be grounded. ANA and JAL canceled some flights or switched aircraft.

Video shot by a Japanese TV reporter, who was on board the ANA flight, showed the interior of the plane as passengers were evacuating, sliding down chutes, and then walking away on the tarmac. The video also showed crew members evacuating the aircraft. ANA and the fire department said one man had minor hip injuries from using the emergency slide, but the other 128 passengers and eight crew members were uninjured.

Japan's transport ministry had already started a separate inspection Monday of a 787 operated by Japan Airlines that had leaked fuel in Tokyo and Boston, where the flight originated.

A fire ignited Jan. 7 in the battery pack of an auxiliary power unit of an empty Japan Airlines 787 on the tarmac in Boston. It took firefighters 40 minutes to put out the blaze.

A computer problem, a minor fuel leak and a cracked windscreen in a cockpit were also reported on a 787 in Japan this month.

Boeing has said that various technical problems are to be expected in the early days of any aircraft model.

The 787 relies more than any other modern airliner on electrical signals to help power nearly everything the plane does. It's also the first Boeing plane to use rechargeable lithium ion batteries, which charge faster and can be molded to space-saving shapes compared to other airplane batteries. The plane is made with lightweight composite materials instead of aluminum.

GS Yuasa Corp., the Japanese company that supplies all the lithium ion batteries for the 787, had no comment as the investigation was still ongoing. Thales, which makes the battery charging system, had no immediate comment.

"They were being very prudent in making the emergency landing even though there's been no information released so far that indicates any of these issues are related," he said.

But much remains uncertain about the problems being experienced by the 787, said Masaharu Hirokane, analyst at Nomura Securities Co. in Tokyo.

"You need to ensure safety 100 percent, and then you also have to get people to feel that the jet is 100 percent safe," Hirokane said.