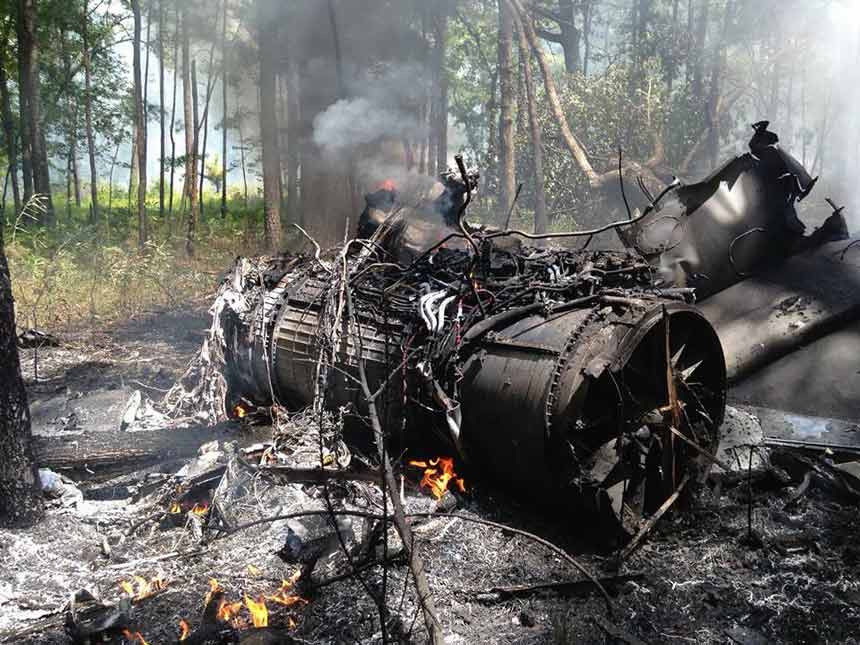 The Federal Aviation Administration said in a statement that the fighter jet collided with a Cessna C150 around 11 a.m. The collision happened about 11 miles north of Charleston.

NTSB officials said two individuals were on board the small Cessna plane during the collision and both of them were killed. It was not immediately known if anyone was hurt on the ground. The cause of the crash is still unclear.

Several media outlets report locals calling in with reports of seeing a fireball in the sky at the time of the incident.

A witness reported that the military plane broadsided the smaller Cessna, said Berkeley County Coroner Bill Salisbury. He said debris was scattered over a wide area. Officials said during a news conference that most of the debris was in a marshy area, including a rice field.

Berkeley County Fire confirmed to CBS affiliate WCSC in Charleston that the fuselage of the Cessna has been located.

The F-16 pilot, Maj. Aaron Johnson, safely ejected and was transported to Joint Base Charleston for examination, according to a statement from Shaw Air Force Base.

A spokesperson for Shaw AFB, which is relatively near the crash site, confirmed via Facebook that the jet was one of their F-16 C fighting falcons.

Concerns of toxic flames coming from the plane have been expressed by officials. A witness told WCSC the crash was in a rice field about 100 feet from land, very close to the historic Lewisfield plantation home.

The Air Force has flown F-16s since the 1970s, though very few active-duty squadrons still fly them. F-16s from Shaw Air Force Base, about 35 miles east of Columbia, routinely fly training missions over eastern South Carolina and the Atlantic.

The smaller plane was a Cessna 150, according to the FAA, a two-seat plane that debuted in 1959 and remains one of the most common single-engine planes in the U.S.

The Cessna 150's maximum altitude is about 15,000 feet, according to the Aircraft Owners and Pilots Association. Most models weigh about 1,500 pounds when fully fueled. By comparison, an F-16 is about 50 feet long and weighs nearly 10 tons, not counting fuel or weapons.