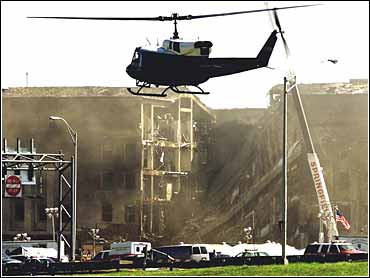 On Tuesday, Sept. 11, 2001, CBS News Consultant Mitch Mitchell found himself an eyewitness to history. Here is his first-person report.

This morning on my way to work, I dropped off my wife at Reagan National Airport so she could catch the 9:30 a.m. flight to New York.

Forty minutes, two terrorist attacks, and three frantic phone calls later, I picked her up at Reagan and was driving her to our home.

As we were headed south on Route 395, we came even with the Pentagon on our right side. At that precise moment, we saw an American Airlines passenger jet, with landing gear up, moving at a very high rate of speed toward us.

It moved from our left front to our right rear, crossing the highway 100 feet in front of us, no higher than 20 feet off the ground.

I shouted that it was going to hit the Pentagon, and two seconds later, it did. We felt the intense heat of the fireball and felt the car shudder as we heard the thud of the impact.

Our lives will never be the same, but we are the fortunate ones.

I have seen horrible death and carnage in combat and was a close eyewitness to the scud attack that killed American servicemen and women in Dharan during the Gulf War.

I saw mangled and charred bodies in Vietnam, Kuwait, and Iraq.

Somehow, they pale in comparison to what we witnessed during the last seven seconds of life for 58 passengers of American Airlines Flight 77 and hundreds of servicemen and women and other government employees in the Pentagon. It happened so quickly, yet in some surreal way, it seemed to occur in slow motion. We felt so helpless, unable to warn those who were about to die. And from this day on, we’ll carry the burden of that memory.

Why did this catastrophe happen? Could it have been prevented, and can we prevent a similar occurrence in the future?

For several years, our nation has made major strides in learning how to protect itself from terrorist attacks. We also have begun to address in earnest how to respond if a terrorist attack occurs. National and local government agencies regularly train to address all aspects of terrorist threats and recovery from attack.

The military has vigorously pursued anti-terrorist and force protection programs, training its members at all levels from Private to General. It is better prepared than ever before to defeat terrorists.

Yet, like its civilian counterparts, it also experiences dramatic failures. Khobar Towers, the Cole, the Pentagon, and undoubtedly others in the future give sad and heart-wrenching testimony that or policies and procedures are far from perfect.

In fact, there will never be such a thing as a fail-safe anti-terrorist program. The best we (or any other country in the world) can hope to do is make it so difficult for a terrorist to attack us, that he will look for an easier target. That is the protection aspect of the program.

Most important, however, is our need to identify terrorist intentions and prevent an act from ever occurring. We are woefully inadequate in that category, and Congress is to blame.

It takes lots of money and years of patient work to develop a human intelligence network, but the results are more than worth the effort. Imagine having had an agent inside the terrorist camp send us the attack plan for the World Trade Center and the Pentagon. How much better it would have been to capture the operatives who executed the deadly tasks rather than respond in heroic fashion to the most catastrophic attack this country has ever endured.

We could have stopped the attack, and we can stop those in the future if Congress wakes up to the reality of 21st Century terrorism. No one can guarantee success in every instance, but we can do so much better than submit the American people to an ignominious defeat at the hands of madmen.