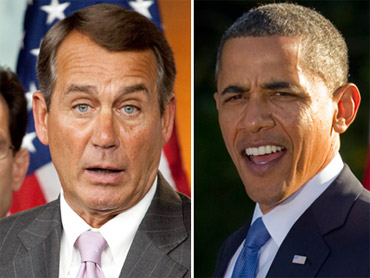 It turned out that 2010 saw some seismic shifts in politics: the ouster of incumbents on both sides of the aisle, but particularly Democratic ones, as part of President Obama's self-described "shellacking" during the November mid-term elections, leading to a new, powerful Republican majority in the House of Representatives and a much slimmer Democratic majority in the Senate.

Then, a turnaround so abrupt and thorough it led to Mr. Obama being dubbed "The Comeback Kid" by many pundits, as he scored many significant legislative victories in the closing days of the lame duck Congress.

CBS News political analyst John Dickerson has gazed into his crystal ball and come up with his predictions - some of which may surprise you. He revealed them on the special New Year's Day edition of "The Early Show on Saturday Morning":

How well will the president and new House Speaker John Boehner be able to work together?

Some Cereal Boxes Are Keepers

I think it is going to get better over time. It is both of their best interests to get things done. They will have fun and they will work together, but in the end they are going to have to be enemies when the campaign for 2012 starts.

What will be the Republicans first order of business when they take control in 2011? Are they going to work with Mr. Obama?

They are going to come out pretty strong. The budget will be the most important issue. They may try to dismantle his healthcare plan. They know they will have to give away some stuff with the negotiation, but I think they are really going to come out strong.

We've been hearing the word "triangulation" a lot. People are talking about President Clinton in 1994. Have you seen any signs of Mr. Obama following the Clinton model? What does it mean for people at home?

We are going to see it, but in a different fashion. We've already seen Mr. Obama do that. He already said he would bring both sides together. With Mr. Clinton, he was always seen as doing it for himself.

What are the big issues the president is going to go after? What is at the top of his to do list? He started out focusing on the war, healthcare and stimulus. Now what?

Budget! I think he has a big decision to make about spending priorities. In the State of the Union, he will try to pitch a smarter budget that will invest in training and technology, and doing this will make America more competitive.

When you look at the potential field of challengers, which Republican will emerge?

It's too early to tell, but I do see Mitt Romney as your traditional frontrunner. And of course, Sarah Palin as you non-traditional.

What does your gut tell you about Palin? Any signs she will be able to be a viable contender in 2012? Does she really want to govern or merely be an influencer and a celebrity?

In a field where there isn't a frontrunner, her popularity will really put her up there. She has her reality show and makes these media appearances for a reason.