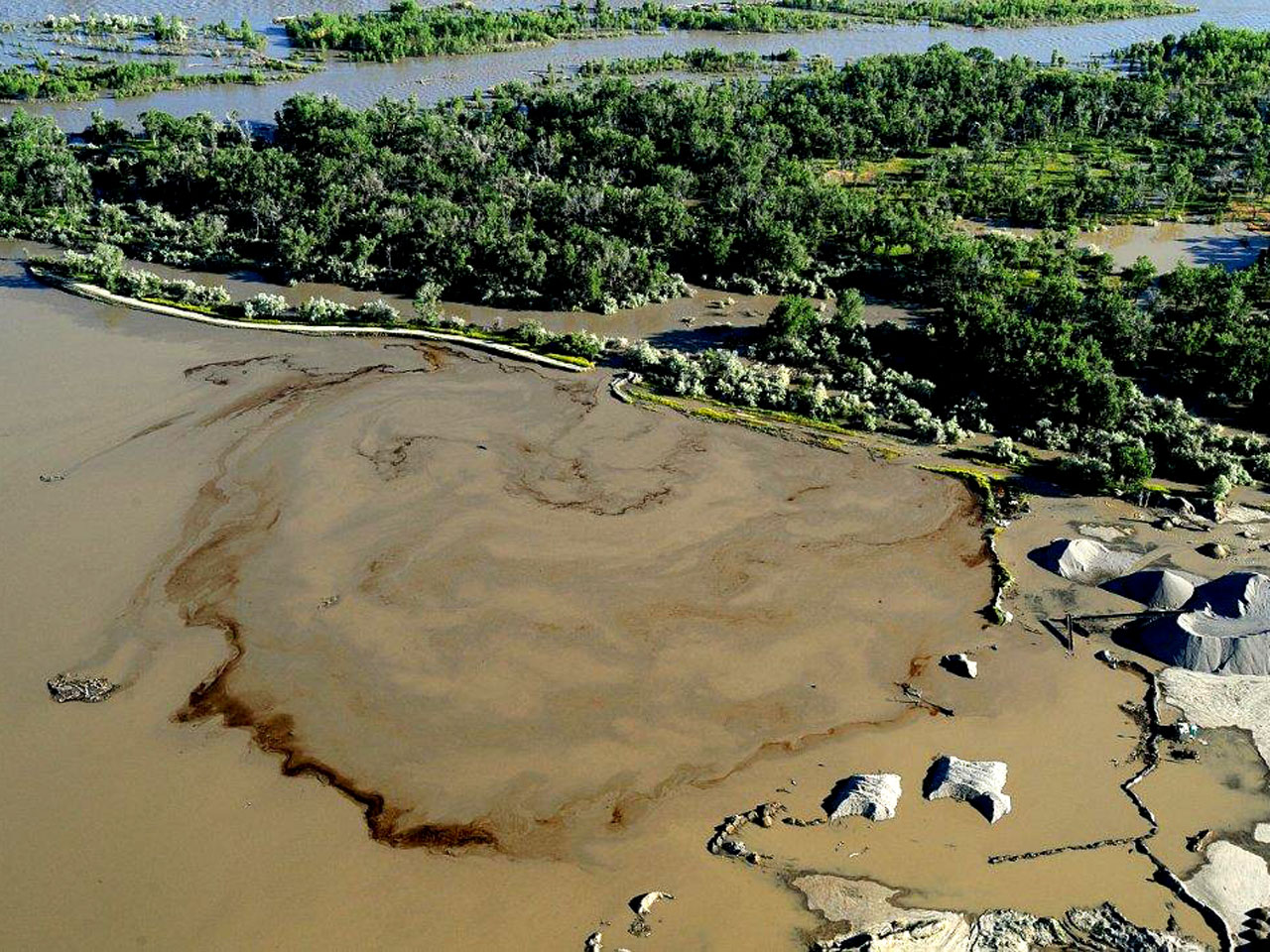 LAUREL, Mont. — An ExxonMobil pipeline that runs under the Yellowstone River in Montana ruptured Saturday and leaked hundreds of barrels of oil into the waterway, causing a 25-mile plume that fouled the riverbank and forced municipalities and irrigation districts downstream to close intakes.

The break near Billings in south-central Montana led to temporary evacuations of hundreds of residents along a 20-mile stretch. Cleanup crews deployed booms and absorbent material as the plume moved downstream at an estimated 5 to 7 mph.

The river has no dams on its way to its confluence with the Missouri River just across the Montana border in North Dakota. It was unclear how far the plume might travel.

ExxonMobil spokeswoman Pam Malek said the pipe leaked an estimated 750 to 1,000 barrels of oil for about a half-hour before it was shut down. Other Exxon officials had estimated up to 42,000 gallons of crude oil escaped.

Duane Winslow, Yellowstone County director of disaster and emergency services, said the plume was dissipating as it moved downstream. "We're just kind of waiting for it to move on down while Exxon is trying to figure out how to corral this monster," Winslow said.

"The timing couldn't be worse," said Steve Knecht, chief of operations for Montana Disaster and Emergency Services, who added that the plume was measured at 25 miles near Pompeys Pillar National Monument. "With the Yellowstone running at flood stage and all the debris, it makes it dang tough to get out there to do anything."

Brent Peters, the fire chief for the city of Laurel about 12 miles west of Billings, said the rupture in the 12-inch diameter pipe occurred late Friday about a mile south of Laurel.

He said about 140 people in the Laurel area were evacuated early Saturday due to concerns about possible explosions and the overpowering fumes. He said they were allowed to return at about 4 a.m. after fumes had decreased.

Winslow said hundreds or residents downstream were told to evacuate in the early morning hours as authorities knocked on doors, but it's unclear how many did.

In a statement, ExxonMobil said it was sending a team to help with cleanup, and that state and federal authorities had been alerted to the spill. The ExxonMobil Pipeline Company "deeply regrets this release," it said.

"Whosever pipeline it is better be knocking on my door soon and explaining how they're going to clean it up," Swanson said as globules of oil bubbled to the surface. "They say they've got it capped off. I'm not so sure."

Crews were putting out absorbent material along stretches of the river in Billings and near Laurel, but there were no attempts at capturing oil farther out in the river. In some areas oil flowed underneath booms and continued downstream.

The smell of oil permeated the air for miles downstream and through the city of Billings.

"Nobody's been able to lay their eyes on the pipe," Peters said. "Right now, the Yellowstone River is at flood stage. The bank isn't stable enough for anybody to get close."

The cause of the rupture in the pipe carrying crude oil from Belfry, Mont., to the company's refinery in Billings wasn't known. Peters and Malek said speculation involves high water that might have gouged out the river bed and exposed the pipe, which was possibly hit by debris.

"I haven't seen it this high for at least 15 years," Peters said.

Jeb Montgomery of ExxonMobil said the pipe was buried six feet below the riverbed.

The state has received record rainfall in the last month and also has a huge snowpack in the mountains that is melting, which has resulted in widespread flooding in recent weeks.

Three oil refineries are in the Billings area, and Peters said he asked all three to turn off the flow of oil in their pipelines under the river once the leak was reported. He said ExxonMobil and Cenex Harvest Refinery did so, and that Conoco Phillips said its pipe was already shut down.

He said the river where the leak occurred is about 250 yards wide, and that an oil slick appeared to be about 20 feet wide.

"That was the farthest my flashlight would reach," he said.

Laurel, which has about 6,500 residents, is known for a huge Fourth of July fireworks display put on by the fire department. Peters said the town can swell to as many as 50,000 people for the event.

He said the fire department plans to hold the event on Monday.