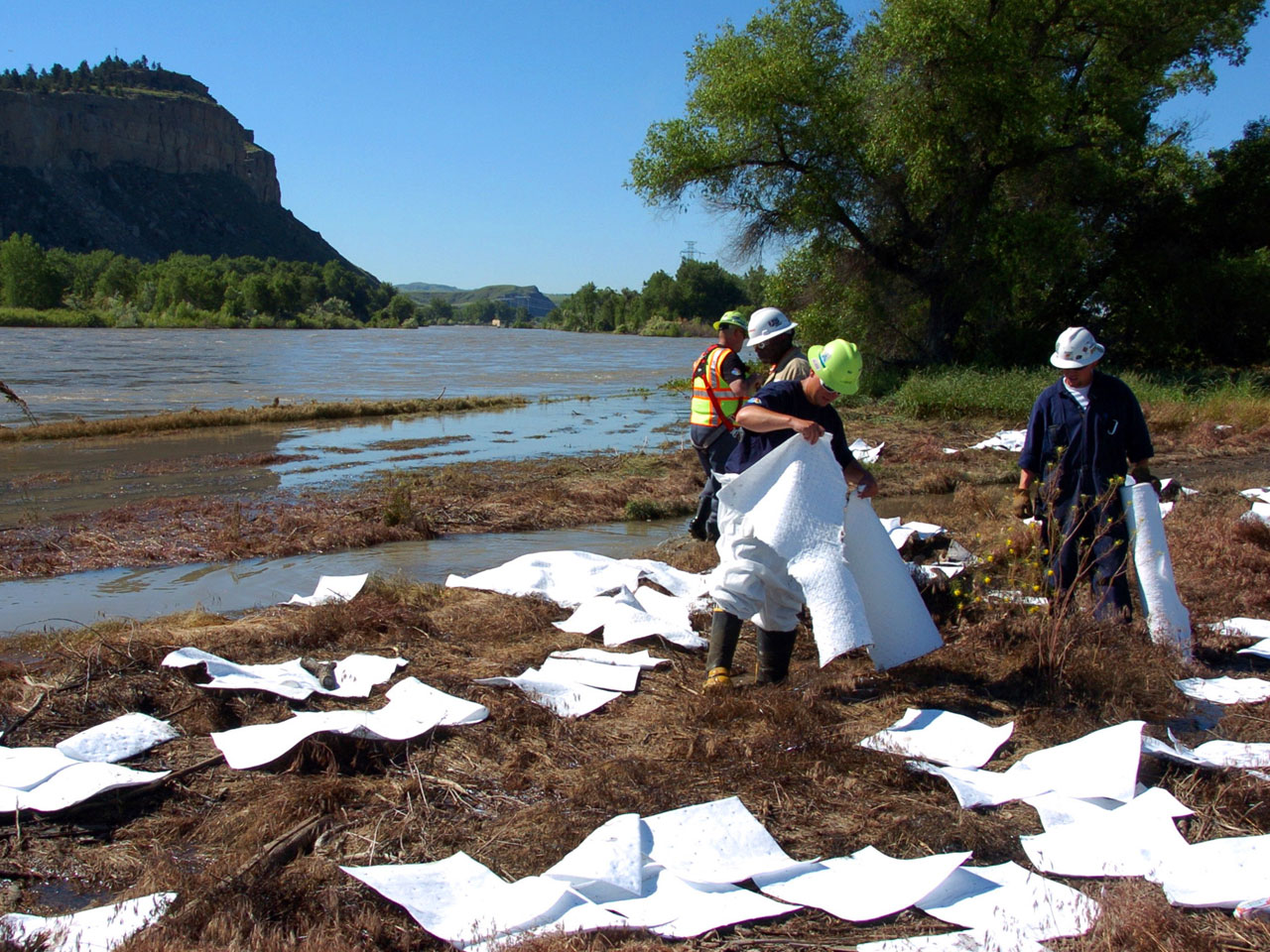 LAUREL, Mont. (AP) — Authorities struggled Sunday to gauge the environmental and crop damage from tens of thousands of gallons of oil that spilled into the legendary Yellowstone River, as Montana's governor criticized Exxon Mobil for downplaying the scope of the disaster.

A break in a company pipeline near Laurel fouled miles of riverbank and forced municipalities and irrigation districts to close intakes across eastern Montana.

Exxon Mobil brought in more cleanup workers to mop up crude at three sites along the flooded river that were coated with thick globs of crude. Yet there was no clear word on how far the damage extended along a scenic river famous for its fishing and vital to farmers who depend on its water for their crops.

The uncertainty frustrated riverfront property owners such as Linda Corbin, who worried that severe damage would be revealed as the flooding Yellowstone recedes in coming weeks. The stench of spilled crude was obvious in Corbin's backyard — a reminder of the potential problems lurking beneath the surface of the nearby river.

"The smell has been enough to gag a maggot," said Corbin, 64. "I just hope it doesn't come too far because I'm on a well, and I won't appreciate having to shower in Exxon oil."

Environmental Protection Agency spokeswoman Sonya Pennock said its staff had spotted oil at least 40 miles downstream. There were other reports of oil as far as 100 miles away, near the town of Hysham.

After Exxon Mobil Pipeline Co. president Gary Pruessing said flyovers had shown most of the damage was limited to a 10-mile stretch of river, Gov. Brian Schweitzer dismissed the claim as premature.

The Democratic governor said Exxon Mobil needed to get more personnel to inspect the situation close-up. He also slammed Pruessing's statement to reporters that no injured wildlife had been found.

"For somebody to say at this early stage that there's no damage to wildlife, that's pretty silly," Schweitzer said. "The Yellowstone River is important to us. We've got to have a physical inspection of that river in small boats — and soon."

Exxon estimated that up to 1,000 barrels, or 42,000 gallons, spilled Saturday before the flow from the damaged pipeline was stopped. An EPA representative said only a small fraction of the spilled oil was likely to be recovered.

State officials earlier reported a 25-mile long slick headed downstream toward the Yellowstone's confluence with the Missouri River, just across the Montana border in North Dakota. Authorities had no further reports on that slick, and Pruessing said the oil appeared to be evaporating and dissipating as the Yellowstone carries it downstream.

Pruessing also said that the 12-inch pipeline had been temporarily shut down in May because of concerns over the rising waters on the Yellowstone. He said the company decided to restart the line after examining its safety record and deciding the risk was low.

The U.S. Department of Transportation, which oversees pipelines, last year issued a warning letter to Exxon Mobil that cited seven safety violations along the ruptured Silvertip pipeline. Two of the warnings faulted the company for its emergency response and pipeline corrosion training.

Transportation department spokeswoman Patricia Klinger said the company has since responded to the warnings and the case was closed.

The company and government officials have speculated that high waters in recent weeks may have scoured the river bottom and exposed the pipeline to debris that could have damaged the pipe. Eastern Montana received record rainfall in the last month and also has a huge snowpack in the mountains that is melting, which has resulted in widespread flooding.

"We are very curious about what may have happened at the bottom of the river. We don't have that yet," Pruessing said.

Crews were putting absorbent material along short stretches of the river in Billings and near Laurel, but no attempts were made at capturing oil farther out. In some areas, oil flowed underneath booms.

EPA on-scene coordinator Steve Way said fast flows along the flooding river were spreading the oil over a large area, making it harder to capture. But Way said that also could reduce damage to wildlife and cropland along the river.

Property owners said they could not wait long for Exxon to clean up, particularly in agricultural areas where crops and grazing pastures were at risk. The Yellowstone River also is popular among fishermen, though areas further upriver from the spill are more heavily trafficked.

Billings-area goat rancher Alexis Bonogofsky said the flooding Yellowstone brought the oil into her summer pastures — pollution that she was afraid would kill the grass needed to feed her animals.

"My place is covered with oil," she said. "I would like a list that says: `This is what's in crude oil."'

The 20-year-old pipeline was last inspected in 2009 using a robotic device that travels through the line looking for corrosion, dents or other problems, Pruessing said. Tests to determine the pipeline's depth were taken in December, and at the time, the line appeared to be 5 to 8 feet below the riverbed, he said.

"It was completely in line with all regulatory requirements," he said.

Workers first became aware of a problem with the pipeline when pressure readings dropped early Saturday. Pruessing said workers began shutting down the line within six minutes, although company officials declined to say how long that process took.

The spill was small compared to other oil-related disasters, such as the 11 million gallons leaked by the Exxon Valdez in Alaska in 1989. But officials said the pristine nature of the Yellowstone, along with its turbulent waters and riverside communities, complicated their cleanup efforts and attempts to assess the damage.