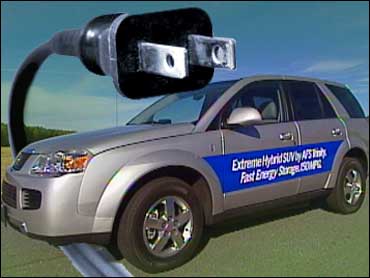 From the outside, the AFS Trinity Power Corporation's concept vehicle looks almost unremarkable.

But the company's Chief Technology officer, Don Bender, took CBS News correspondent Seth Doane for a drive in it and told him that he absolutely loves this car.

The technology tucked inside is called "XH", or "extreme hybrid" and that is what makes this automobile revolutionary.

What is exotic about the car is that owners can, in part, trade trips to the gas pump for a simple electrical plug.

Finally, a "plug-in hybrid" powerful enough to accelerate to sixty miles per hour in about ten-seconds, with the range to run forty miles on battery power alone.

According to figures from the 2003 National Highway Travel Survey, that's enough to get roughly eighty percent of Americans through their daily routine.

"So," Doane asked Bender, "for most people going to the store, running errands, getting to work, those typical things - you could take this car; it would run on battery all of the time?"

"It would never burn a drop of gasoline," Bender answered.

After those 40 miles, the car switches to a standard gas-powered engine.

The innovation lies in special energy storage devices called ultra-capacitors or ultra-caps, which kick in during acceleration to protect the lithium-ion batteries.

Historically, electric cars have been mostly experimental, with limited range and performance. The problem has been developing durable and safe batteries with enough power to run a big machine.

"All electric vehicles were plagued by the same problem, which was the battery," said AFS Trinity's Ed Furia, who has ushered this technology from plan to the parkway. He says it could signal a wholesale change.

"If you can go to work, come back, plug it in, get up the next day and do that every day and not burn a drop of gasoline," Furia suggested. "Everything else follows."

The manufacturer estimates this technology will add another $8,500 to the sticker price of any car, but claims it will pay for itself in three to five years when you factor in the gasoline savings.

Getting this plug-in hybrid prototype to a track, where it operates pretty much like a normal vehicle, has been a process that's taken some 15 years, Doane reports, and it's been a labor of love.

For Furia, once a co-founder of Earth Day and EPA official, developing this technology has been a dream.

"It's almost too exciting to express," he said.

And getting behind the wheel is quite emotional.

"What we're doing is engaging in something that could produce massive change," Furia said slowly, "so there's a lot of resistance to that."

Furia hopes this technology could eventually help free Americans from pain at the pump, and America from its growing dependence on oil.