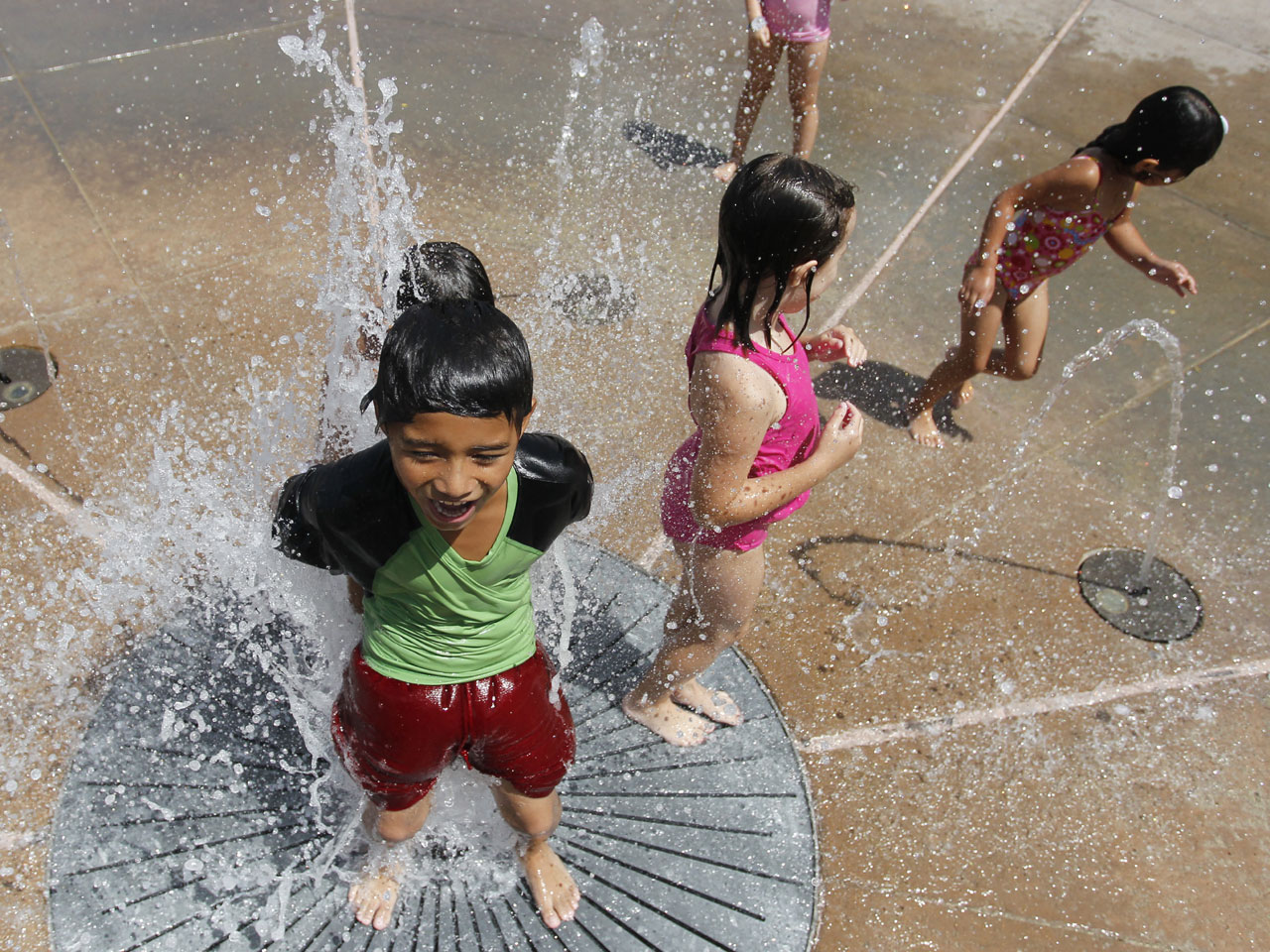 DALLAS — The temperature setting is stuck on broil across a swath of the Midwest and South, with Dallas and Oklahoma City sweltering through 100-degree heat for at least 10 days in a row.

Forecasters warned on Monday that the extreme heat could continue for most of the week and perhaps beyond. At the same time, many people won't be able to cool off by taking a dip: Swimming pools in some cities have closed because of budget cuts.

Heat advisories and excessive-heat warnings were issued Monday for 17 states in the Midwest and South. For Tuesday, the National Weather Service issued heat advisories for much of the East Coast, from Georgia to Connecticut, where temperatures are expected in the upper 90s but will feel as hot as 105 because of the humidity.

"It says a lot when you are dealing with such an expansive area of heat alerts," said National Weather Service spokesman Chris Vaccaro.

Photos: 11 ways you risk killing yourself this summer

Hutchinson, Kan., had reached 103 by Monday afternoon after hitting a scorching 112 on Sunday. (Records haven't been kept there long enough to tell if it was a new high for the date.) The mercury hit 99 in Joplin, Mo., by the afternoon after topping out on Sunday at 106, breaking the record of 104 for the date, set in 1980.

Dallas recorded its 10th-straight day of 100-degree weather Monday. The city hit 100 for nearly three straight weeks as recently as 2006, and the National Weather Service issued a heat advisory Monday afternoon for the Dallas-Fort Worth area for the first time since June 18. The advisory will remain in effect until Wednesday night.

Triple-digit highs are expected through the weekend in Dallas, and there is little chance of rain to cool things down.

"It's breaking daily records, but when you're talking about a record string of days — we're not there yet," Vaccaro said. "We're in the midst of a heat wave that's not over yet."

On Monday, 87-year-old R.F. Lanham was taking the heat in stride as he picked weeds in his shaded front yard in Dallas. "I've seen a lot of hot summers," he said.

As 40-year-old Sally Smith loaded two of her children into her minivan as she left a spin class at a Dallas YMCA, she said that even though she had lived in Texas for 18 years, the hot weather was hard to get used to.

"You feel like your skin is baking," the Michigan native said.

In Fort Worth, all of the city's pools are closed because of budget cuts. Through a partnership with the YMCA, Fort Worth residents can swim at four of its pools for two hours a day without a membership.

Authorities said a 51-year-old man suffered heat stroke and died Sunday because his mobile home in Granite City, Ill., had no working air conditioner. His body temperature was 104 when he arrived at the hospital.

In Tahlequah, Okla., 56-year-old David Vaughan, who works construction at water treatment plants, said he was using survival skills he learned while working in Kuwait.

"In Kuwait, we had a saying: Walk slow and drink a lot of water," he said.

In El Paso, Texas, 67-year-old Jesus Franco was the grateful recipient of a fan from the Texas Department of Family and Protective Services. Franco, who is blind, said that he had a small air conditioning unit installed in his home last week, but even then, "at night it gets so hot you can't sleep."

As the stream of air cooled his shirtless torso Monday, he said, "This is much nicer."

Felix Cabrera, an employee of the agency giving out the fans, said: "With so many people unemployed and the population getting older, we are getting more calls."

In New Orleans, the heat was, as usual, heavy and suffocating — but just under 95 degrees, cool enough to allow the mule-drawn carriages to continue riding through the French Quarter. When the mercury hits 95, tourist guides are prohibited from working their mules.

Lorna Taylor, a guide and horse trainer, kept a close eye on her mule, Elvis. She threw snacks into his trough to force him to dunk his head in the water. But she wasn't worried.

"Mules are desert-dwellers," she said, sweat glistening on her brow. "So this is a walk in the park."