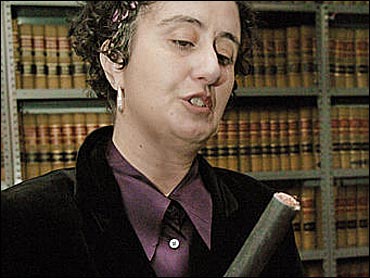 "Extraordinary rendition" sounds like a phrase from Gilbert and Sullivan or Charles Dickens. But it is a controversial legal concept that is moving quickly to the front-burner of the legal and political world. Never mind the ongoing fight over the rights of the Guantanamo Bay detainees, the intensifying debate over the constitutional propriety of extraordinary rendition already looms as the most important battle of the year in the legal war on terrorism.

Thanks mainly to the fine work of journalist Jane Mayer in the last issue of The New Yorker magazine, more and more people, including important lawmakers, are paying closer attention to the government policy wherein terror suspects are transferred from U.S. control into the control of foreign governments, so that interrogation methods that are not permitted under U.S. law may be applied to the suspects. In other words, when our government decides that a particular suspect may have information that is of particular use, and that this information must be obtained quickly, it farms the suspect out to governments that permit, or at least do not explicitly outlaw, torture. And apparently it does this despite a 1998 law that seems to prohibit the practice.

For a long time, extraordinary rendition occurred covertly among the intelligence communities of the participating countries. The New York Times reported last week, citing unnamed former intelligence officials, that the practice has been "widely used" since the 1990s and that "perhaps more than 100 cases" have arisen since September 11, 2001. But it is covert no more. Some of the men who were the subject of extraordinary rendition have been released, presumably because they were not terrorists, and they are speaking out about what they endured in the name of the war on terror.

Thanks to Mayer, CBS News' "60 Minutes," the Canadian Broadcasting Corporation, and other reporters and outlets focusing upon the issue, the whole world now knows about people like Mahar Arar, a Canadian citizen who claims he was tortured after being subjected to extraordinarily rendition by and between the U.S. and, of all countries, Syria. Likewise, the whole world now knows about Ibn al-Sheikh al-Libi, who reportedly was taken out of FBI custody by the CIA and shipped to Egypt, where he promptly, according to Mayer, gave the U.S. bad information about the use of chemical weapons in Iraq. And now comes word that Congress and the CIA, increasingly aware of the legal, moral, ethical, political and practical pitfalls of such a policy, are contemplating changes to it.

Earlier this month, the New York Times reported that the Senate intelligence committee now is considering a bipartisan investigation to determine "whether there was a sufficient legal foundation for the coercive interrogation methods, secret detention and extrajudicial handing over of detainees to other countries that the CIA has practiced." The effort, the Times reported, stems in part from the fallout of the now infamous government memorandum in August 2002 – a/k/a the "Gonzales Memo," named after the new attorney general – that narrowly "defined torture as acts that induced pain tantamount to organ failure." Now that the Bush administration has backed off that ill-advised memo and the odious practice it endorsed, the legislative branch of government wants to make sure that operatives in the field truly are backing off its directives.

Then, just a few days ago, the Times reported more movement on this story. Now, apparently, the CIA itself is "seeking to scale back its role as interrogator and custodian of terrorist leaders who are being held without charges in secret sites around the world." In part, the Times' article reports, the CIA's change of tack is motivated by increasingly shaky legal support for the detentions, especially in the wake of the two terror-case rulings last June by the United States Supreme Court which recognized certain due process rights for detainees. Those landmark rulings – in which the justices famously told the president that "a state of war is not a blank check" – have spawned several lower court rulings that slowly but surely are stemming executive branch control over terror suspects.

Moreover, the scandal last year at Abu Ghraib prison hardly helped the agency's political or legal position in favor of harsh and in many ways unprecedented treatment of certain prisoners. And the government's policy of detention and interrogation already has complicated, indeed stalled, the federal prosecution of Zacarias Moussaoui, the Al Qaeda operative who was captured before the terror attacks on America. Moussaoui's trial has been on hold now for more than three years in part because prosecutors, defense attorneys, Moussaoui and the judge cannot agree on whether and how Moussaoui should be allowed to use at trial the "testimony" of two Al Qaeda leaders, detainees who perhaps were tortured after perhaps being subjected to extraordinary rendition.

But it isn't just the genuine (and warranted) fear of bad results in court that has intelligence officials and lawmakers looking to change its dynamic when it comes to detention, interrogation, and rendition. The CIA's newfound interest in washing its hands of these men also stems from practical considerations as well, the Times and others have reported. Many of the terror suspects they are holding now no longer have much intelligence value, yet they are still unlikely ever to be turned over to any prosecutor for trial. It's unclear whether they ever have committed any domestic crimes and, even if they did, the interrogation methods they purportedly endured surely would generate heartburn for federal judges. Now that they may have been tortured, in other words, they very likely cannot be successfully prosecuted.

So instead of releasing the men or holding them indefinitely, the CIA is looking for ways to ditch them, preferably, the Times reports, to the FBI or even to other countries (which, in turn, could heat up new extraordinary rendition problems for the government). It's the ultimate game of Hot Potato. Now that the government has these men, has used them up as best it can, and has argued that there is no law that can protect them, it doesn't know what to do with them. If it keeps them, it has to spend the time and money guarding them. And, of course, keeping prisoners like this in these circumstances always can lead to a repeat of the shameful Abu Ghraib episode.

On the other hand, if it sends the detainees elsewhere, it runs the risk that they will either be tortured or released – if the U.S. cannot afford to keep the men, why would anyone think that Syria or Egypt would? And if it sends them elsewhere and they are tortured, surely if they survive and ultimately are released they will come back, like Arar, and file a big lawsuit against the government. The government has always said that the war on terror would require a new way of thinking and acting toward this new breed of foes – part criminal defendant, part terror suspect, part political prisoner. Now that new thinking and acting requires a new solution to this growing problem.

The courts for years have been evaluating the constitutionality of the government's detention and interrogation methods. That's nothing new. Extraordinary rendition is another matter. There is precious little case law on the issue and none since the terror attacks of Sept. 11, 2001.The Arar lawsuit, first filed over a year ago, only now is nearly briefed. The government, predictably, has moved to dismiss the case on a number of grounds, including the fact that it would force the feds to reveal "secrets" that would impair their ability to win the war on terror. For his part, Arar claimed that his "rendition" violated his constitutional rights as well as his rights under the Torture Victim Protection Act, a federal law passed in 1991 that gave federal courts jurisdiction over lawsuit brought aliens (like Arar) alleging torture by a foreign nation.

Moreover, as Mayer points out, there is a federal law that states that it is "the policy of the United States not to expel, extradite, or otherwise effect the involuntary return of any person to a country in which there are substantial grounds for believing the person would be in danger of being subjected to torture, regardless of whether the person is physically present in the United States." And then there is the United Nations Convention Against Torture, which has a slightly different definition for when a "rendition" becomes illegal. Those precedents, too, may make it into this case before it is through.

In 2002, aside from the aborted trial of John Walker Lindh, the courts hadn't really even responded to the legal war on terror. In 2003, we saw the first major skirmishes in the battle over what rights Moussaoui would receive in his federal trial. In 2004, the Supreme Court final spoke, in the "enemy combatants" cases and the initial case about the detentions at Guantanamo Bay. You don't need to look any further for this year's big legal theme. It's here.