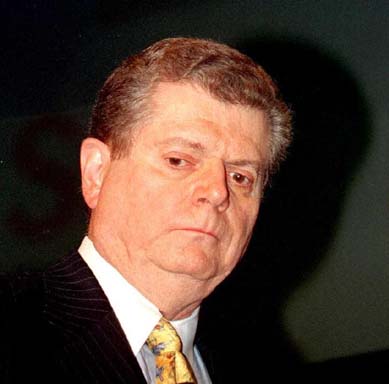 Carlos Perez didn't have his best off-speed pitch and he didn't need it.

The Montreal Expos left-hander stuck with his fastball and got his sixth straight victory as the Expos beat Philadelphia 3-2 on Wednesday night.

Perez said he only threw a few changeups because, while warming up in the bullpen, he didn't like the way it was moving.

"It's bad for a pitcher when the changeup is moving inside to the righties. You can get hit a lot," he said. "When I saw the changeup wasn't working, I just had to throw fastballs."

Perez (6-3) gave up seven hits and two runs, walked none and struck out four in his second complete game of the season. He hasn't lost since April 27 at St. Louis.

"He could have easily packed it in when he didn't have his best off-speed pitch, but he kept battling," said his catcher, Chris Widger. "It's probably the best he's located his fastball in the times I've caught him, especially in."

Robert Perez's two-out RBI single in the eighth snapped a tie and helped the Expos win their first series on the road since taking two of three from the New York Yankees last Aug. 29-31.

Vladimir Guerrero led off the eighth with a single, stole second and came home on Robert Perez's single to left.

Wayne Gomes (4-2), who relieved starter Matt Beech in the eighth, took the loss. Gomes allowed three hits and one run in two-thirds of an inning.

"He (Gomes) didn't get the pitch in enough on Perez," Phillies manager Terry Francona said. "He's been throwing good enough so that if you did get three hits in an inning, it didn't hurt us."

Guerrero went 3-for-4 with a homer, and Rondell White also homered for Montreal.

An error by Montreal shortstop Mark Grudzielanek allowed Philadelphia to tie the game 2-2 in the seventh.

Mark Lewis led off the inning with a double, moved to third on a sacrifice and scored when Alex Arias' hard-hit grounder went between Grudzielanek's legs.

White led off the second inning with his 10th homer of the year, and his seventh since May 19.

The Phillies tied it 1-1 in the third when Scott Rolen's RBI single scored Doug Glanville, who had singled and stole second.

But Guerrero led off the fourth with a solo homer that restored Montreal's one-run lead. It was Guerrero's third home run in nine career at-bats against Beech, who has given up a team-high 10 homers this season.

The Phillies loaded the bases with one out in the second, but third baseman Shane Andrews threw out a runner at the plate after fielding a grounder by Arias, and Beech struck out to end the inning.

The Expos had runners on first and second with one out in the thirdbut Brad Fullmer lined into a double play. Montreal also stranded a runner at third in the sixth.