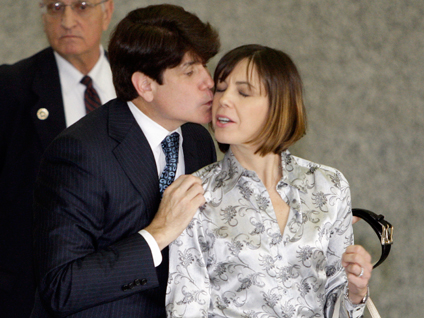 A secret CIA program to transfer suspected terrorists to foreign countries that use torture during interrogations was approved at the highest levels of the U.S. government,

Mike Scheuer, the former head of the CIA's Osama bin Laden unit and one of the agents who helped set up the program, tells 60 Minutes it was authorized by Clinton's National Security Council and officials in Congress - and all understood what it meant to send suspects to those countries.

"They don't have the same legal system we have. But we know that going into it," says Scheuer. "And so the idea that we're gonna suddenly throw our hands up like Claude Raines in 'Casablanca' and say, 'I'm shocked that justice in Egypt isn't like it is in Milwaukee,' there's a certain disingenuousness to that."

A senior Bush administration official told the New York Times the program is a legal alternative to the cumbersome and expensive process of holding terror suspects in U.S. facilities.

The official told the Times the program is not used to send people to other countries to be tortured, but did not dispute that some prisoners had been mistreated.

"Nothing is 100 percent unless we're sitting there staring at them 24 hours a day," the official told the Times.

CIA Director Porter Goss testified to the Senate Intelligence Committee last month that the United States has a responsibility to ensure that transferred prisoners are treated humanely. "But of course once they're out of our control, there's only so much we can do," he said.

Scheuer says the program allows American policy makers and American politicians to avoid making hard decisions. "It's finding someone else to do your dirty work," he says.

Scheuer notes its OK with him if useful information is gleaned through torture.

"I'm responsible for protecting Americans," he says. "The information that we have received as a result of these programs has been very useful."

60 Minutes tracked the secret jet the Central Intelligence Agency is said to be using to deliver the terror suspects to countries known for torturing people.

The plane made at least 600 flights to 40 countries, all of which came after 9/11, including 30 trips to Jordan, 19 to Afghanistan, 17 to Morocco, and 16 to Iraq. The plane also went to Egypt, Libya and Guantanamo Bay, Cuba.

The jet made 10 trips to Uzbekistan, where the former British ambassador to the country, Craig Murray, says the jet and its then-owner, Premier Executive Transport Services, kept a small staff at the airport in Tashkent.

Murray tells 60 Minutes, that Uzbek interrogators use unusually cruel methods. "Techniques of drowning and suffocation, rape was used ...and also the insertion of limbs in boiling liquid....It's quite common," says Murray.

He says he knew for sure of two Uzbeks captured in Afghanistan and brought back for questioning. "I believe it was happening on a regular basis," he says.

Murray says he complained to his superiors that information was being obtained by torture and sent his deputy to the CIA station chief to inquire about the practice.

"The CIA definitely knows," he says. His deputy confirmed that "this material probably was obtained under torture but the CIA didn't see that [as] a problem," recalls Murray. He was ordered to return to London four months ago and has since left the government.

The agency told 60 Minutes the meeting Murray described didn't happen. The CIA also says it does not knowingly receive intelligence obtained by torture.

Earlier this year, 60 Minutes interviewed a Syrian-born Canadian citizen, Maher Arar, who says he was sent from the U.S. to Syria to be interrogated and tortured for a year before he was released without charges.

In January, the United States released Mamdouh Habib from the U.S. prison camp at Guantanamo Bay, Cuba, to Australia without charges. He alleges he was tortured while in custody.

A Milan prosecutor is investigating the February 2003 disappearance of Imam Hassan Osama Nasr from the streets of Italy, the Los Angeles Times reports, noting it has all the hallmarks of the U.S. program.