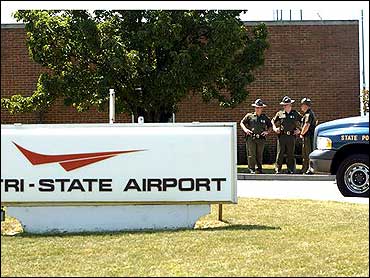 A terminal at the Tri-State Airport was evacuated Thursday morning after two containers in a female passenger's bag tested positive for liquid explosives, a Transportation Security Administration spokeswoman said.

"The bomb squad is on site and the woman is being interviewed by the FBI," the TSA's Amy von Walter said. "It looks like there were four items containing liquids ... two of those containers tested positive."

But law enforcement sources say the substances that tested positive were cosmetic-based products and not a threat CBS News reports.

U.S. authorities banned the carrying of liquids onto flights last week after the arrest of 21 people in London in an alleged plot to blow up U.S.-bound planes using explosives disguised as drinks and other common products.

The woman was detained for questioning by the FBI and both the TSA and FBI were on-site conducting interviews, but normal flight activity has been resumed, according to the TSA.

The first alarm was set off at 9:15 a.m., when security personnel at a checkpoint ran an explosive trace detection test on a water bottle being carried by a passenger, CBS News correspondent Bob Orr reports.

"There were four items containing liquids," the TSA said in a statement. "Two containers tested positive for explosive material."

Airport manager Larry Salyers said he was told the 28-year-old woman was originally from Pakistan but had moved to Huntington, West Virginia, from Jackson, Michigan.

She was heading to Detroit. It was not immediately clear whether she would be charged.

Salyers said the bottles would be moved by robot to a remote area of the airport where officials would attempt to detonate them. National Guard and State Police explosive experts will conduct chemical field tests to determine what's inside them, he said.

US Airways spokeswoman Valerie Wunder said one of its flights was diverted to Charleston's Yeager Airport about 60 miles away.

Commercial airline service was suspended at least until 5 p.m., and about 100 passengers and airport employees were ordered to leave the terminal, Booton said.

Joy and John Cloutre of Ulysses, Kentucky, were waiting for a flight to begin the first leg of their trip to the country of Brunei when the evacuation order came.

"My family didn't want me to leave because of the terrorism in Brunei," Joy Cloutre told the Herald Dispatch of Huntington. "And then we don't even get out of Huntington without something like this happening."

Huntington residents Shannon and Wayne Bloss and their two sons were heading to Orlando, Florida, for a family wedding.

"It's not really fear," she said. "This is such a small airport. I never imagined something like this happening here. It could be worse."