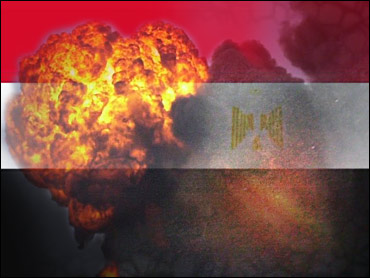 Multiple explosions, some caused by car bombs, have killed at least 36 people and wounded 150 in the Egyptian Sinai resort of Sharm el-Sheik, security officials said.

Possibly as many as seven explosions rocked the tourist resort, targeting several hotels and severely damaging at least one hotel, witnesses said.

The blasts, the first of which went off about 1:15 a.m., shook windows, and smoke and fire were visible rising from Sharm's Naama Bay, a main strip of beach hotels, witnesses said.

A police official in Sharm el-Sheik said 25 were killed and 110 wounded in multiple explosions targeting the Ghazala Gardens and Movenpick hotels in Naama Bay and the Old Market area nearby. Other officials in Sharm said there may have been as many as seven blasts, three in Naama Bay and one in the market.

The officials spoke on condition of anonymity because they were giving the information ahead of any official announcement.

Amal Mustafa, 28, an Egyptian who was visiting Sharm with her family, said she drove by the Ghazala Garden — a four-star resort on the main tourist strip in Naama — and it was "completely burned down, destroyed."

Khaled Sakran, a Sharm resident, said he saw one explosion from the Old Market. "I saw the saw the fire in the sky," he told The Associated Press. "Right after, I saw a light in the sky and heard another explosion, coming from Naama Bay."

"The blast shook my house, I can see the fire and lots of smoke," Akram al-Sherif, a Jordanian who was staying at a summer house about less than a mile away, said.

In October 2004, a series of explosions hit several hotels in the Sinai resorts of Taba and Ras Shitan, about 180 kilometers (100 miles) northwest along the Gulf of Aqaba coast, killing 34 people. Egyptian authorities said that attack was linked to Israeli-Palestinian violence and launched a large wave of arrests in Sinai.