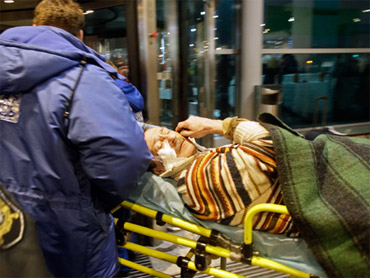 MOSCOW - A suicide bomber carrying a suitcase set off a huge explosion in Moscow's busiest airport in the late afternoon rush as many international flights were arriving, killing as many as 35 people and wounding about 180.

The international arrivals terminal at Domodedovo Airport was engulfed by smoke and splattered with body parts after the mid-afternoon terror attack sprayed shrapnel, screws and ball bearings at passengers and workers in a loosely guarded area. Hundreds of people were in the vicinity of the explosion at the time.

CBS News correspondent Mark Phillips reports that just before he detonated his explosives, the bomber shouted: "I will kill you all."

The attack came after a terror-threat warning, a Russian security source told CBS News, and this is at least the second time security at that airport has failed. Two suicide bombers killed 90 people on two flights from the same airport in 2004.

This attack is again suspected to be the work of Islamic militants from Russia's North Caucasus region. While the victims of previous attacks were largely Russian, this bomber targeted the international arrivals area of the airport, where foreigners would inevitably be.

"That moment I saw people die on the floor and people lying on luggage trolleys and it was coming to me," said Frank Osterdijh, a traveler from Denmark. "It was terrible."

President Dmitry Medvedev immediately ordered authorities to beef up security at Moscow's two other commercial airports and other key transport facilities. He also canceled plans to fly out Tuesday to Davos, Switzerland, where he aimed to promote Russia as a profitable investment haven to world business leaders.

Monday's attack was most likely carried out by a suicide bomber and "attempts were being made to identify him," Investigative Committee spokesman Vladimir Markin said. The Interfax news agency, citing law enforcement sources, said the head of the suspected bomber had been found.

The attack also called into question Russia's ability to safely host major international sports events like the 2014 Winter Olympics in Sochi and the 2018 World Cup.

Large-scale battles in Chechnya ended years ago, following two devastating wars between Russia and the republic's separatists, but Islamic militants have continued to carry out suicide bombings and other attacks. Most of the attacks have been in Chechnya and other predominantly Muslim provinces in the southern Caucasus region, but some have targeted Moscow, including its subways, buses and trains.

In Washington, President Barack Obama condemned the "outrageous act of terrorism" in Moscow and offered any assistance Russians investigators may want.

Amateur video posted on YouTube showed a pile of bodies on the floor airport floor, and other bodies scattered around. Luggage lay strewn across the ground and several small fires burned. A dazed man in a suit pushed a baggage cart through the carnage.

A man in blood-soaked clothes said he was just a few yards away from the explosion and saw a man who may have been the suicide bomber.

"I saw the suitcase, the suitcase was on fire," said Artyom Zhilenkov, a 35-year-old driver. "So, either the man blew up something, or something went off on the man's body, or the suitcase went off."

Zhilenkov said he thought he had been severely injured, but doctors told him was just coated in other victims' blood.

"The guy standing next to me was torn to pieces," he said.

Car rental agent Alexei Spiridonov, 25, was at his desk when the blast struck about 100 yards away.

"The explosion was so strong that it threw me against the wall," he told The Associated Press outside the airport. "People were panicking, rushing out of the hall or looking for their relatives. There were people just lying in blood."

"There was lots of blood, severed legs flying around," she said.

Sergei Lavochkin, who was waiting in the arrivals hall for a friend to arrive from Cuba, said passengers sprinted out of the terminal and emergency teams carried those unable to walk.

"I heard a loud bang, saw plastic panels falling down from the ceiling and heard people screaming. Then people started running away," Lavochkin told Rossiya 24 television.

Aviation security experts have been warning since the Sept. 11, 2001 terror attacks that the crowds at many airports present tempting targets to suicide bombers.

"Airports are by their nature crowded places, with meeters, greeters, commercial businesses, and so on," said Philip Baum, the editor of Aviation Security International, a London-based publication dedicated to security issues.

Domodedovo was briefly closed to air traffic immediately after the blast, but soon reopened. Hours later, passengers arriving for their flights lined up outside waiting to pass through metal detectors that had been installed at all entrances.

Built in 1964, Domodedovo is located 26 miles southeast of Moscow and is the largest of the three major airports that serve the Russian capital, handling over 22 million people last year. It is generally regarded as Moscow's most up-to-date airport, but its security procedures have been called into question.

The airport insists that security is one of its top priorities, claiming on its website that its "cutting-edge operations technology guarantees the safety of passengers' and guests' lives."

"I strongly condemn it," he said on Twitter. "NATO and Russia stand together in the fight against terrorism."

It was not clear late Tuesday if Medvedev would still give the opening address Wednesday at the World Economic Forum in Davos.

FIFA President Sepp Blatter was in St. Petersburg over the weekend to formally award Russia the 2018 World Cup. Prior to the signing, Putin assured him that FIFA had made the right choice.