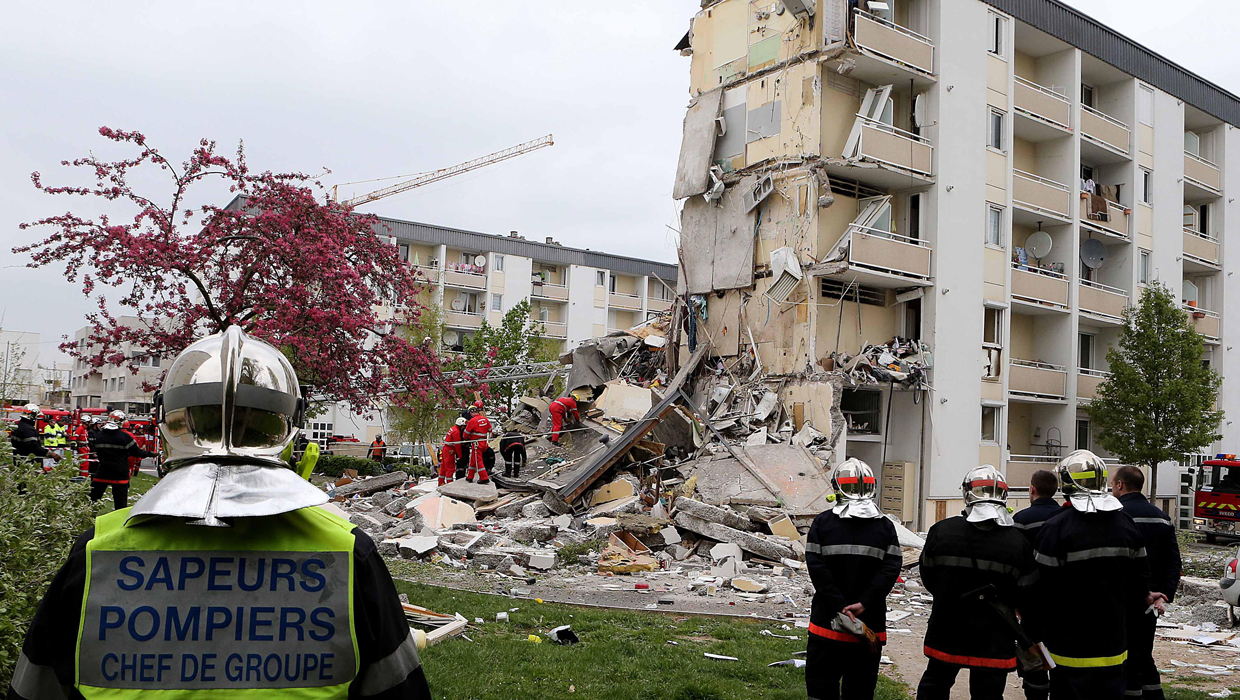 REIMS, France A possible gas explosion ripped off the side of a five-story residential building in France's Champagne country on Sunday, killing at least three people and injuring 14 others, officials said.

More than 100 rescue workers, firefighters, sniffer-dog squads and bomb and gas experts were deployed to the gutted building in a subsidized housing complex in the city of Reims, east of Paris, officials said. Heaps of debris spilled out of the building onto a grassy esplanade below.

"The explosion of a residential building in Reims is a terrible drama," the office of French President Francois Hollande said in a statement, conveying his condolences to the victims' relatives.

Michel Bernard, the top government official in Reims, said crews searching for survivors turned up the body of a woman under the rubble Sunday afternoon, raising the death toll to three. He said it was unlikely that the toll would rise any higher.

Through most of the day, authorities had said at least two people had died. One person was hospitalized with serious, but not life-threatening injuries, and another 13 people had minor injuries, officials said. Authorities used backhoes to help clear away the rubble.

"We don't know the cause of the explosion. It was probably due to gas," Reims mayor Adeline Hazan said at the scene. An official investigation was under way to determine the cause, she said. Authorities say the three people known to have died were adults.

"The explosion was very strong, like a sonic boom from a fighter plane. We had been playing football on a field about 30 meters (100 feet) away, and ran to the scene," housing project resident Abdel Kader said. "The building had fallen like a house of cards ... 30 seconds after that we saw a man calling for help, he was on a slab. His legs were caught."

Bernard, the government official in Reims, said the building dated to the 1960s. About 10 of the 40 or so apartments were affected on the end of the rectangular building, he said.

The precariousness of some buildings has come to light internationally in recent days following the collapse Wednesday of an eight-story building in a suburb of Dhaka, Bangladesh, where at least 362 people have been confirmed to have died. Officials said three floors of the building, which had housed garment factories, had been built illegally.