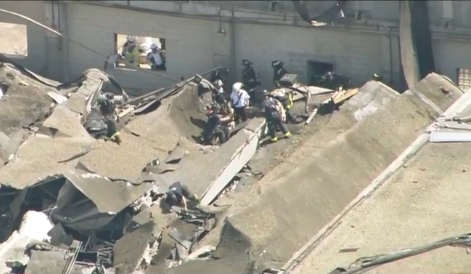 CHICAGO -- At least eight people were injured after an explosion caused a section of roof to collapse at a Chicago water reclamation plant on the city's far South Side, according to authorities.

Chicago Fire Department spokesman Larry Merritt told the Chicago Tribune all of the injured were taken to area hospitals in serious-to-critical condition.

At least two had been reported trapped inside the building when the explosion occurred around 11 a.m. Thursday at the one-story brick building. The Metropolitan Water Reclamation District of Greater Chicago said the explosion happened in the plant's sludge concentration building, CBS Chicago reported.

Firefighters were seen rescuing one person from the building shortly after the collapse. The fire department later asked television stations to keep their helicopters away from the scene because the noise was making it difficult for firefighters to hear if anyone was still inside.

The cause of the explosion wasn't immediately unclear.