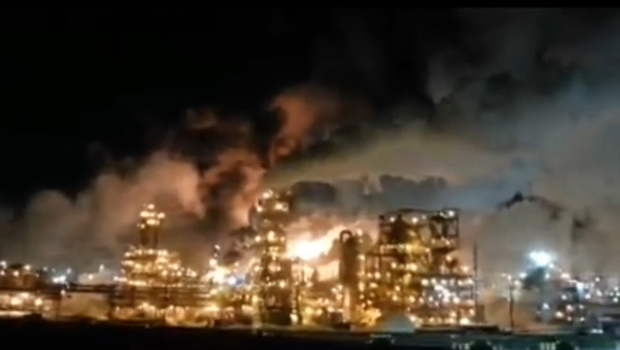 LIMA, Ohio -- An explosion at an Ohio oil refinery blew out windows at homes in Lima on Saturday and could be felt at least 10 miles away but resulted in no injuries, police said.

All workers were accounted for after the blast at the Husky Lima Refinery, according to police.

The blast triggered a fire that burned into the afternoon and sent black smoke billowing into the air above the refinery. Crews were monitoring the air to make sure there was no danger to those nearby.

Those tests had not detected anything hazardous in the first hours after the explosion, said Heidi Griesmer, a spokeswoman for the Environmental Protection Agency.

No one had to be evacuated, but nearby streets were closed for about seven hours, said Lima police Sgt. Andy Green. About 20 homeowners reported that the explosion broke their windows.

"It was felt throughout the city," Green said.

Lima Police told CBS affiliate WBNS-TV in Columbus the fire was contained by late afternoon and that plant officials were no longer worried about secondary explosions.

The explosion happened in a processing unit where crude oil is heated to begin the process of breaking it down into other products.

"It is still too early to say what the impact may be to production, but we do have substantial product in inventory to continue to supply customers," Husky Energy Spokesman Mel Duvall said in a statement, CBS affiliate WHIO in Dayton reported.

The refinery anchors an industrial area in Lima, which is about 80 miles northwest of Columbus. Duvall said the plant is one of the oldest in the country and produces various oil-based products including gasoline, diesel and jet fuel.