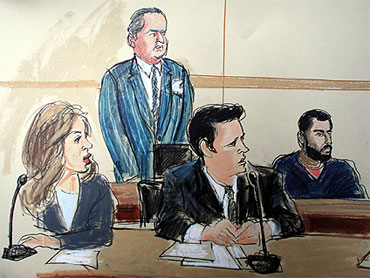 The Afghan immigrant accused of buying large quantities of hair dye and nail polish remover to make explosives had the goods to kill scores of people in New York - a devastating attack on a scale with the transit bombings in London and Madrid, according to documents and interviews with former FBI experts.

Prosecutors have not said exactly what kind or number of bombs Najibullah Zazi planned to build, but court documents hint at the possibilities. It is likely he wanted to borrow a tactic used overseas by making bombs out of flour and hydrogen peroxide and putting them in backpacks, perhaps in the city's transit system, experts say.

The case has been described as perhaps the most serious terrorist plot uncovered in the U.S. since 9/11. However, experts said Zazi, who is being held without bail in New York, had the means to kill scores of people - not hundreds or thousands.

"These explosives are meant to be concealed easily and deployed easily and kill and maim and cause havoc in small areas," said Denny Kline, a retired FBI explosives expert. For a really big bomb, "you're going to need a truck."

How far along Zazi managed to get is unclear. Investigators have not said whether he successfully built or tested any bombs.

He and others also bought acetone - nail polish remover - and other ingredients that can be used to make a powerful and highly unstable explosive called triacetone triperoxide, or TATP. The same explosive was used by would-be shoe bomber Richard Reid in 2001 and the terrorists who carried out the London bombings in 2005 that killed 52 people.

But in each of those earlier instances, TATP was not the main charge - it was the detonator. It was supposed to help detonate the plastic explosives in Reid's shoe aboard a jetliner, and it was used to set off a mixture of black pepper and hydrogen peroxide in London.

Likewise, experts in the Zazi case said the TATP was most likely going to be just the detonator.

"It is used more as a detonator because it's easy to initiate," said Leo W. West, a retired FBI explosives expert. "TATP is not the type of thing you want to bounce around with."

Read more on the alleged terror plot at CBSNews.com:

While experts say hydrogen peroxide-based bombs are relatively easy to make with the correct recipe, Zazi was struggling. In early September, Zazi was communicating frantically with another individual "seeking to correct mixtures of ingredients to make explosives," according to court documents.

Prosecutors say he requested information about flour and ghee oil, which is strained butter typically used in Indian communities. Notes lifted from Zazi's laptop computer discuss formulations for "mixing hydrogen peroxide with flour, and list ghee oil as a type of fuel that can be used to help initiate the explosive device," prosecutors said.

Zazi would have been taking a big risk if he had planned to use a car to transport large quantities of the TATP to New York from Denver, where he is suspected of buying ingredients and trying to make the bombs. TATP is sensitive to heat, friction and shock.

Dave Williams, another retired FBI explosives expert, said a half cup of TATP would blow the doors off a car and probably kill anybody inside.

"It's very dangerous," Williams said. In 2006, an explosion ripped through a Texas apartment where two men were making TATP. One was killed, the other injured.

Mixing hydrogen peroxide and flour is less fraught with peril than the TATP, experts say.

Court documents say Zazi twice rented a hotel room near Denver with a kitchen and his "bomb-making notes contemplate heating the components in order to make them highly concentrated."

Investigators found acetone residue in the vent above the stove. The three components of TATP are hydrogen peroxide, acetone and an acid. Acetone can be bought in drug stores and home improvement stores alike.

"They'd have to distill it, and that's where your cooking comes in," Williams said. "They'd have to make something that almost resembles a still so they could capture the acetone."

It is probably not something Zazi would have done at home. "That would give off a lot of odor," Williams said.

Explosives experts said Zazi might also have been trying to distill the hydrogen peroxide to reach a certain concentration, hitting what explosive experts call the "sweet spot."

Muktar Said Ibrahim, one of the men convicted of conspiring to bomb London's transit system on July 21, 2005, testified how he and others bought hydrogen peroxide and reduced it in a saucepan to a dangerously high concentration. The chemical was then mixed with flour, packed into plastic tubes and topped with detonators made with TATP.

The four bombs failed to explode. West said the bombers probably used the wrong concentration of hydrogen peroxide. However, a set of bombs detonated on July 7 in London worked, killing scores of people. The only difference in those bombs was that the terrorists used black pepper instead of flour.

The 2004 Madrid terror bombings killed 191 people and injured 2,000 others but did not involve hydrogen peroxide-based explosives. Four crowded commuter trains were ripped apart with a string of 10 backpack bombs made of plastic explosives.