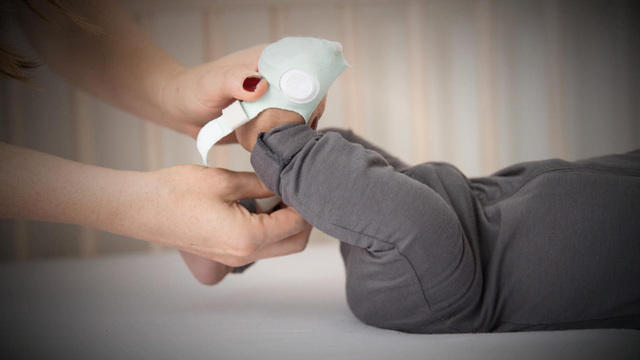 Some popular baby monitors that track infants’ vital signs might create more problems than they prevent. The emerging class of wearable devices for infants hook up to parents’ smartphones to give real-time updates of their baby’s breathing and heart rate.

But a review in the Journal of the American Medical Association says there is no “available evidence supporting the safety, accuracy, effectiveness or role of these monitors.”

According to experts, these devices may cause undue stress for parents, even leading to unnecessary hospital visits and tests that are expensive and potentially harmful. But companies making the devices claim they give parents peace of mind, and some parents agree, reports CBS News medical contributor Dr. Tara Narula.

Seven-month-old Jordan Sell wasn’t always the healthy baby he is today. Born six weeks early, his mother Jaime said his oxygen levels kept dropping during his stay in the neonatal intensive care unit. He was hooked up to monitors around the clock. Jordan was released after three weeks.

“We were concerned that not being hooked up to the monitors, we couldn’t see his heart rate that we were accustomed to viewing all the time in the hospital,” Jaime Sell said.

They bought an Owlet baby monitor, against the advice of the NICU nurses.

“They thought that all it would do is give false alarms and it would wake us up constantly in the middle of the night and we decided to go ahead and get it anyway. It was worth every penny,” Sell said. “We were so glad that we got it.”

Devices like the Owlet are the focus of the JAMA Viewpoint review. Authors specifically call out smartphone-linked wearables, like smart socks, onesies and diaper clips.

The devices measure babies’ biometrics, like pulse rate and oxygen, and send those measurements to apps to the parents’ apps.

In a statement, Owlet acknowledged a “lack of evidence behind certain products,” but said they are “actively addressing and resolving these concerns.”

“There is no evidence that they’ll help kids and there’s some evidence of potential harm,” said Dr. Christopher Bonafide, a pediatrician and co-author of the JAMA Review.

Bonafide said there’s no way to prove their accuracy and they can lead to false alarms and unnecessary treatments.

“If an alarm bell goes off at home about a low oxygen saturation, what could that lead to?” Narula asked.

The American Academy of Pediatrics has also advised against the monitors, stating: “Do not use home cardiorespiratory monitors as a strategy to reduce the risk of SIDS” – one of the leading causes of infant mortality.

But because the companies don’t make specific medical claims, the devices are not regulated by the FDA.

“We are not saying that we are a SIDS monitor at all,” said Mollie Evans, who created the Baby Vida monitor along with her husband Jeff Evans.

The couple came up with the product after their twin baby girls contracted RSV, an infection that causes breathing trouble. Doctors told them to check the infants’ breathing every 45 minutes.

“We thought, ‘Well, what happens between zero and 45 minutes?’ And we said we need to do something about this,” Mollie said.

They enlisted a team of engineers and designed a sock with sensors that monitor oxygen levels and heart rate.

“We said that if we saved one child’s life in being able to create this product for somebody, that it was worth it,” Mollie said.

Dr. Bonafide said while he doesn’t advise it, he urges parents who do choose to use monitors to also stick with tried and tested recommendations for SIDS prevention. That includes things like always having your baby sleep on their back, using tight-fitting mattress sheets and leaving nothing else in the crib, like blankets or stuffed animals, that could pose a suffocation hazard.