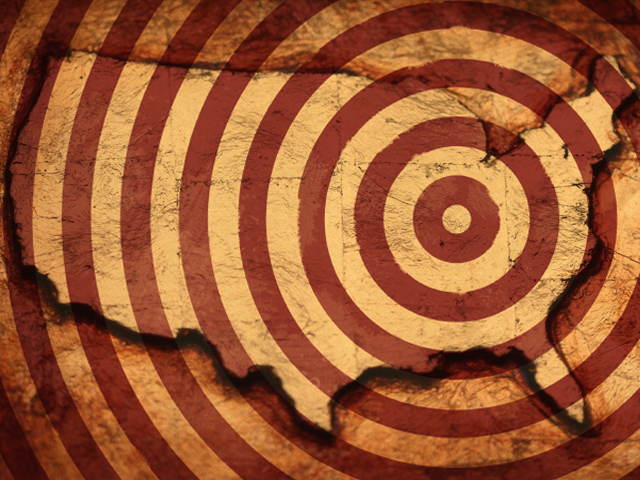 The United States is grappling with increased threats from catastrophic superstorms like Sandy due to climate change. An increasingly interconnected world means that a deadly contagious disease could spread to multiple countries before it has even been identified. Terrorism remains a serious threat, with many experts predicting that it is just a matter of time before the nation must grapple with another significant attack.

It is against this backdrop that the federal and state governments have made significant cuts to disaster preparedness funding as they have grappled with budget shortfalls and growing debt. With the "sequester" budget cuts looming and further belt-tightening expected in the future, disaster preparedness experts warn that decreases in funding are leaving the nation at risk.

"All kinds of cuts in the budgets for public health agencies and health care in general have made it very difficult," said Dr. Irwin Redlener, Director of National Center for Disaster Preparedness at Columbia University. "And our response right now is probably going to be more limited than it would be before we started cutting back on a lot of budgets. We're in a very difficult situation right now. Because of the [financial] crisis we're cutting back on public health support, which of course is a gamble we're taking."

Dr. Nicole Lurie, assistant secretary for preparedness and response at the Department of Health and Human Services, said there have been significant cuts to public health preparedness at the federal, state and local level.

"And the more we have those kinds of cuts, the more it will degrade our preparedness, and the more we will be playing catch up and not be able to do the best job we can do if another event happens," she said.

In fiscal year 2010, Congress appropriated $3.05 billion to FEMA for preparedness grants designed to strengthen "our nation's ability to prevent, protect, respond to, and recover from terrorist attacks, major disasters and other emergencies, said Rep. David Price, D-N.C., who chaired the House Appropriations homeland security subcommittee at the time. In fiscal year 2012, that appropriation was less than half that figure - $1.35 billion. The same trend could be seen in FEMA pre-disaster mitigation grants, which fell from $100 million in 2010 to $35.5 million two years later.

Price, who is now the ranking member of the subcommittee, blamed the drop in funding on the "Tea Party mentality that has gotten more prevalent on the Republican side" since the GOP takeover of the House.

Republicans see the cuts as a necessary step in getting the nation's fiscal house in order. In 2011, when Price complained that Republicans had moved to "decimate" preparedness funding, Appropriations Committee Chairman Hal Rogers, R-Ky., told Congressional Quarterly, "In today's environment, we can't be subsidizing local governments to the extent we have."

On Monday, Homeland Security Secretary Janet Napolitano warned that the automatic, across-the-board spending cuts set to kick in on March 1 -- the "sequester" -- will undermine preparedness and national security. She said there would be a nearly $1 billion reduction in disaster relief funding and said that reductions in homeland security grant funding would lead "to potential layoffs of state and local emergency personnel across the country."

"Threats from terrorism and the need to respond and recover from natural disasters do not diminish because of budget cuts," she said. "Even in the current fiscal climate, we do not have the luxury of making significant reductions to our capabilities without significant impacts."

Kevin Chason, director of emergency management at Mount Sinai Medical Center in New York City, said that funding constraints force the hospital to make tough choices about how to prepare for a disaster. He said the current level of disaster preparedness funding provided to allied hospitals in the New York City area is "very small."

"It's not nearly enough...to move generators or buy new generators or move fuel supply pumps around the organization," he said. "It's probably enough to pay a portion of a salary to manage a program."

There have been some recent efforts to invest in preparedness - superstorm Sandy prompted New York Gov. Andrew Cuomo to put forth a $9 billion plan to safeguard New York City for the next major storm - but experts said cash-strapped local, state and federal officials are largely focused on dealing with current crises, not what might come down the road.

"Emergency preparedness in the health care community is not the highest priority during normal business operations," said Chason.

Price argues that the nation would be wise to spend more on preparedness so that it don't have to spend much more in recovery. (The federal government is spending more than $50 billion to help in Sandy recovery.) He said the challenge is convincing people to make the investment, since preparedness funding "doesn't have quite the emotional pull of the relief following the disaster striking."

"There's a whole range of things where a modest investment well placed can save a huge amount of relief money, recovery money if disaster is going to strike," he said. "Nothing is unlimited, we need to be careful, but I don't think we have enough."