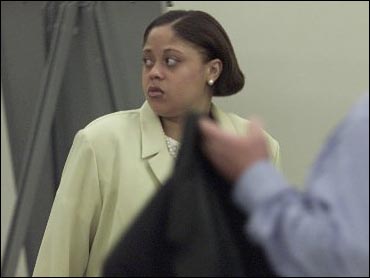 The victim's blood took center stage in day two of a Texas woman's murder trial, reports CBS News Correspondent Elizabeth Sanchez, on location in Ft. Worth to follow the case.

Chante Mallard is accused of hitting a homeless man with her car in 2001 and leaving him to die lodged in the windshield.

A forensic expert testified today in a Fort Worth courtroom that blood spatters inside the car indicate victim Gregory Biggs remained alive for a time while stuck in the windshield, possibly moving his hand and gasping.

On the second day of Mallard's murder trial, jurors saw a bloodstained seat, interior door panel and center console from her car that hit Biggs as he walked along a highway near her house on Oct. 26, 2001.

Expert Max Courtney says Biggs may have coughed up blood into the car. He also says there are signs that Biggs' bleeding hand was inside the car.

The defense doesn't dispute that Mallard drove home while the man was stuck in the shattered windshield and then parked in her garage without calling for help, but says his death was an accident, not murder.

Prosecutor Christy Jack says Mallard could have sought help for Biggs at a fire or police station or called an ambulance.

Prosecutors and defense attorneys in the murder case both said Mallard, 27, smoked pot, took Ecstasy and drank heavily in the hours before she hit Biggs on a highway and drove home in the early hours of Oct. 26, 2001.

Prosecutors say Biggs, a former bricklayer, father of one, down on his luck homeless man, would be alive had Chante Mallard helped him, reports CBS News Correspondent Bob McNamara.

Mallard, 27, faces life in prison if convicted of killing Biggs, 37, whose body was found the next day in a park. She has pleaded guilty to tampering with evidence, which could bring a sentence of up to 10 years.

"If I have blood in my mouth and I cough or wheeze forcefully, I could produce such a bloodstain," Courtney said.

A pool of blood in the passenger door pocket indicates Biggs' bleeding hand was inside it, and other bloodstains had been smeared, he said.

Hair found in the passenger seat belt buckle was from a Caucasian, Courtney said. Biggs was white; Mallard is black.

Mallard's friend, Clete Jackson, and his cousin, Herbert Tyrone Cleveland, pleaded guilty last year to dumping Biggs' body. Jackson was sentenced to 10 years for tampering with evidence and Cleveland got nine years. As part of plea bargains, they agreed to testify at Mallard's trial.