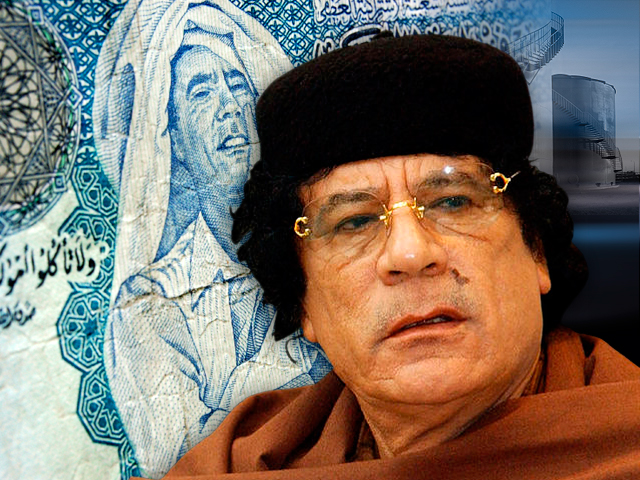 The United States is stepping up its pressure on Libyan leader Muammar Qaddafi as the regime's violent response to the anti-government protests continue.

President Obama has issued an executive order that slaps full economic sanctions against Qaddafi, his family and his regime. Those sanctions include freezing the Qaddafi family assets.

Qaddafi: How Much is He Worth?

Meanwhile, Secretary of State Hillary Clinton is on her way to Geneva this weekend to meet with members of the United Nations Human Rights Council.

All American citizens are now safely out of the country and the Embassy is temporarily shut down.

Parag Khanna, a senior fellow with the New American Foundation and the author of "How to Run the World: Charting a Course to the Next Renaissance" (Random House), spoke with CBS News national correspondent Russ Mitchell.

Mitchell: This is not Qaddafi's first time to the sanction party.

Khanna: He's been in power for 42 years partially because sanctions are imposed on him to allow him to cement control over the country. We've seen this before: Castro, the Assad family in Syria, and Saddam Hussein in Iraq. So sanctions have a way of sort of isolating a regime, and entrenching it in power. So, unfortunately, the record, or the track record of sanctions is somewhat patchy.

Mitchell: In Libya, specifically, sanctions were imposed back in the 1980s and lifted in 2004. Were those sanctions effective?

Khanna: Those sanctions, again, really froze the country in time. They effectively harmed the population, in the sense that they didn't have access to economic resources, to the kind of foreign investment that the society needs to develop. They allowed Qaddafi to really own the economy, such as he very much has. So when he talk about sanctions, for example, we're really talking about sanctions not on Libya, but on Qaddafi the man, because he has really colonized and own these.

Khanna: That's often what happens with sanctions, unfortunately. Right now these are short-term kinds of sanctions. This is an effort to try to squeeze the man very quickly. This isn't one of those things that is going to drag on for years and years, quite frankly, because he doesn't have years left in his life. But that said, they're going to have limited impact on the ground. Because right now, it's not about money. It's about how much weapons does he have, how many tribes does he control? That's what matters more right now than whether or not we've frozen assets in Geneva.

Mitchell: If the sanctions don't work, in your mind, what should the United States do?

Khanna: They're going to have to consider more serious options. Flying to Geneva, the Human Rights Council, is one thing. And they can make statements and declarations. They're going to have to consider more serious measures. They may have to support the potential independence, in fact, of the eastern half of the country, whose capital is Benghazi. That's one scenario people were talking about. Potentially some kind of military intervention to try and sort of isolate him further within the capital. Or at least stop some of his military forces from conducting the raids and the assaults they are on the people. There's still some options on the table. This is going to escalate before it deescalates.

Mitchell: Another delicate dance for the White House in the situation as we've seen over the past few weeks is talk about military intervention. How likely is that now?

Khanna: Right now not very likely. We've seen how reluctant the Obama administration is to do that in situations after Iraq and Afghanistan because our forces are stretched. In a case like Libya, we don't know what will come next. There are other situations where you were to oust a leader you know that there's a government, there's a parliament, there's a cabinet, someone would step in. Here it's already chaos. Just simply taking him out, which is physically possible, but if you don't know what's next, it's somewhat irresponsible.

Mitchell: As you look at everything that is working against him now, the sanctions, his people are against it, can he hang on for the next few weeks?

Khanna: You know, because it is a very tribal society, he can hang onto his part of the country which does, in fact, include Tripoli where the local tribe, which is his own, is loyal to him. Although people within his tribe, family members have resigned, have stepped away, have started to back the opposition. But in a situation like now where he's actually giving weapons out on the street to people who are supporting him, it's really too early to tell. But it is, unfortunately, possible that he can hang on to Tripoli for awhile.