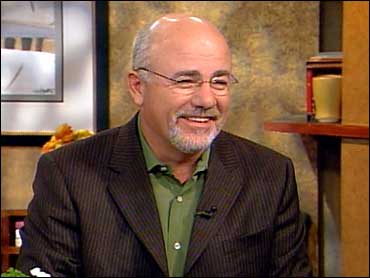 All the gloom and doom in the media over the economy has lots of us scurrying to change what we've been doing on the investment front.

There are hitches, though, according to financial author and radio host Dave Ramsey: We're not IN a recession, and even if we were, that's often the best time to invest!

The basic bottom line, says Ramsey: Stay the course on your investment strategies, as long as they've proven successful!

On The Early Show Tuesday, as part of the "Recession-Proofing Your Life" series, Ramsey answered questions e-mailed in by viewers:

"WHAT ARE YOUR THOUGHTS ON A WORLDWIDE ECONOMIC COLLAPSE? IS IT JUST TALK?" asks John, from New York.

"I'm 47-years-old," Ramsey replied, "and every year in my memory, there's been some sort of talk like this ... but I've never seen it happen.

OK -- but how can we be so certain that the world's not going to fall apart this time around?

"The U.S has the most robust economy in the history of man, and it's the most sophisticated it's ever been; there are lots of checks and balances and safety nets," Ramsey explained.

He pointed out that, "The market dropped the same amount (relatively) when President Nixon resigned as it did during the Great Depression, but there were so many more safety nets in place in the 1970s that the drop didn't have the same effect. The markets dropped 511 points in minutes when the markets opened after 9/11, but there still was no crash or meltdown.

"By definition we are not in a recession," Ramsey said forcefully. "We have not even had one month of recession; we've had SLOW GROWTH. The economy was growing at (an annual rate of) 3.5 percent; now, it's at 1.5 percent, which is a big impact, but it's still growth. In order to be in a recession we must RECEDE: The official definition of an economic recession is an economy that has negative growth, that shrinks, for six consecutive months or more."

"Stop investing because of a 'maybe' recession? Absolutely not," Ramsey responded. "If we go into a full-blown recession, that would be a GREAT time to invest: It's like going to K-Mart when the blue light is on!

"Think about it: You've lost money in the stock market lately because your investments are worth less now than they were a few months ago. That's a bummer for the stocks you already own, but what about the ones you would like to buy? It's kind of like stocks are on sale at the moment. If you were given $10,000 to invest in Coca-Cola, when would you want purchase shares? When they were $60 or $35 per share? The market has never, never, never lost money over the long-term. So, go ahead and buy now; you'll be happy you did later."

Does Katherine have more reason to be concerned, since it sounds as if she might be retiring in the next ten years?

"One hundred percent of 10-year periods in the stock market have made money," he answered. "She's only (about) 56. She's not going to lose all of her retirement before she's 65. Stay the course!"

"SHOULD I RECESSION-PROOF MY 401(k) BY SWAPPING OUT RISKIER STOCKS FOR BONDS?" asks Lisa, from North Carolina.

"No," Ramsey said. "Bonds aren't necessarily safe, particularly when the Fed is pushing rates down. Bonds under-performed stocks for 70 years. Don't try to time the market, pulling in and out of 'safe' investments. Lots of statistics prove that if you invest steadily, you'll win in the end."

Again, according to Ramsey, now isn't the time to change your basic investment strategies. General investors will come out of this period OK, if they stick with their game plan.