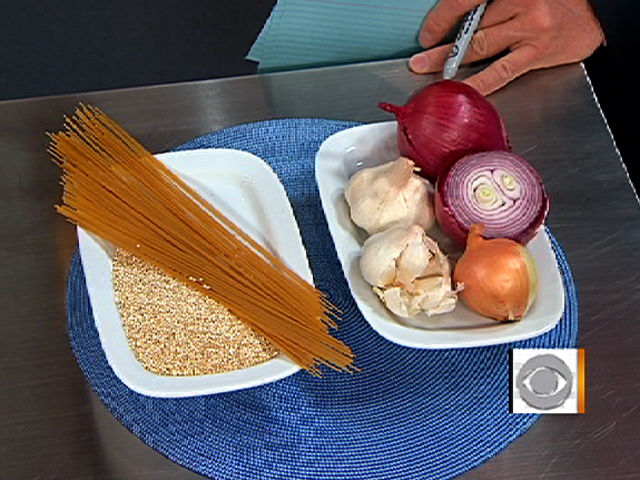 Pairing up certain foods is natural, such as peanut butter and jelly. But, according to registered dietician Cynthia Sass, combining some foods can actually make them much more beneficial to your health than eating them separately.

On "The Early Show," Sass shared the following pairings, their potential effects on your health and some easy dishes you can whip up at home to get the foods' benefits:

Salsa and guacamole: Salsa counts as a veggie and is rich in antioxidants and guacamole is a great source of vitamin E and heart healthy fat. When we combine salsa and guacamole, you get more nutrition bang per bite. Researchers at Ohio State looked at the absorption of several key antioxidants when men and women ate salads and salsa with and without fresh avocado. When salads were peppered with 2.5 tablespoons of avocado, the subjects absorbed over eight times more alpha-carotene and 13 times more beta-carotene, both of which help fight cancer and heart disease.

2. Homemade baked corn tortilla chips with both salsa and guacamole for dipping

Beans and red peppers: Beans are a terrific source of fiber and minerals including iron and red peppers are bursting with vitamin C - a half cup packs even more than a medium orange. When we combine beans and red peppers their power is even greater. One cup of cooked kidney beans contains about 25 percent of your daily iron needs. But just two percent to 20 percent of the iron in plant foods makes its way from your digestive tract into your blood, compared to 15 percent to 35 percent from animal-based iron foods. Fortunately, vitamin C gives plant-based iron a sizeable boost, upping the absorption by six times. If you're a vegetarian or avoid red meat make a habit of pairing these up.

Broccoli and tomatoes: Broccoli and tomatoes are both major cancer fighters. But when we combine broccoli and tomatoes it's like 2+2=5. Researchers at the University of Illinois, Urbana, found that prostate tumors grew much less in rats fed tomatoes and broccoli than in rats who ate broccoli only, tomatoes alone, or diets containing disease protective substances isolated from tomatoes or broccoli. If you don't have a prostate to protect, the cancer defense this duo offers may also extend to ovarian cancer, a disease that often becomes symptomatic only after it has spread to other organs.

2. Kabobs with little broccoli florets skewered and grape or cherry tomatoes brushed with olive oil and roasted or grilled

1. Chicken rubbed with tea leaves combined with pepper and other herbs like thyme

Whole grains with garlic or onions:

Whole grains fight obesity, heart disease and diabetes while garlic and onions fight inflammation. But when we combine whole grains with garlic or onions the effects are enhanced. A study published in the Journal of Agricultural and Food Chemistry found that combining garlic and/or onions with whole grains may help boost the absorption of iron and zinc, minerals that can be tough to absorb from plant-based sources. Iron helps transport oxygen to all of your cells and zinc boosts immunity. The sulfur compounds in onions and garlic, which give them their characteristic odor, may be the key.