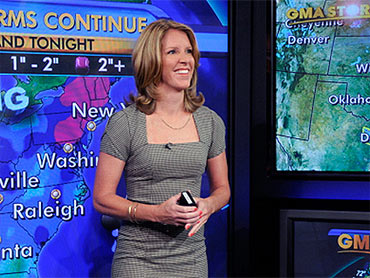 In New York, a prominent TV meteorologist who told police she escaped from an attempted rape is now accused of making it all up.

Heidi Jones was arrested over the weekend. She's been taken off the air by her station, WABC-TV, pending the authorities' investigation.

According to police, Jones waited a month to report the incident and described her attacker as a stocky, Hispanic man who tackled her from behind. But when authorities canvassed the area and began to ask questions, the story didn't add up. After questioning Jones a second time, police say there were inconsistencies in her story, and when confronted, Jones confessed.

Police Commissioner Raymond Kelly told CBS News, "She stated that she had some personal problems and that, in fact, the information she had given to the police initially was incorrect."

Jones, who also fills in for ABC's "Good Morning America" has been suspended pending an investigation. Her attorney says she plans to enter a not guilty plea and issued the following statement: "Miss Jones has had a distinguished career as a broadcast journalist and urges all concerned to refrain from jumping to conclusions about the unproven charges against her being discussed in the press."

Police say Jones fabricated the story after experiencing personal relationship problems. She was charged with a misdemeanor and could face up to a year in prison if she's found guilty. Jones, Nguyen added, is scheduled to appear in court Jan. 15.

But could Jones face jail time?

"It's a misdemeanor carrying a maximum of a year plus some fines," he said. "By all accounts, she's a good and and decent person. ... I would think if I'm her lawyer I would argue, and I think a judge would be sympathetic, problems here, probation, let her deal with whatever the problems are, no need to jail a person like this. I wouldn't anticipate it."

Ford added, "A lot of people are surprised that's actually a crime. We are all familiar with the notion of perjury, you swear to tell the truth in a courtroom or in a deposition in a grand jury and you lie. That's an easy one. Historically a crime, but we've seen over the years that most jurisdictions also say 'Now, look, if you are being questioned about an investigation -- an official law enforcement (officer) asking you questions and you lie about it, as long as it is something material, something important, not a detail but if you lie about it, the law says that also is a crime."

"The idea simply you are sending out law enforcement people chasing after something with limited resources and time and energy and there will be consequences," he said. "Here, the allegation is that by making this whole thing up, she triggers an investigation, and that's why she's looking at what she's looking at."

So why would someone fake a rape attempt?

On "The Early Show," Contributor Dr. Jennifer Hartstein, a psychologist, said, "It's a really interesting question that we're all kind of trying to figure out. She did admit there were some personal setbacks going on in her life that she was potentially reaching out for some sympathy, that's one reason. Clearly, something, much deeper than that is happening. Did she have -- is this like a link to lots more trauma, a problem of lying that we can reach back into her past and also find? We don't know. Is it a psychotic break? I don't know. All of these questions really something really messed up with her reality testing and she doesn't have the skills to ask for the help she needs, which leads to the very big problematic behaviors."

"Early Show" co-anchor Harry Smith, noted, "Here's a person that's in public that goes to the police -- would have, you know, cognitive ability to know there are consequences of that kind of an action -- and then when the police do what they do, she knows they're going to do, and they find out. There's almost, do you put yourself in a situation where you are going to be found out?"

Hartstein responded, "You know, there is a question of is there a thrill to that, too? ... Is it additional attention-seeking behavior? ... To me it is really a skills deficit, asking for sympathy and going really big and broad having a break from reality to think about what the consequences are going to be when she does this behavior."