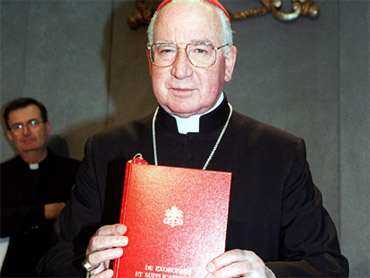 Citing a shortage of priests who can perform the rite, the nation's Roman Catholic bishops are sponsoring a conference on how to conduct exorcisms.

The two-day training, starting Friday in Baltimore, is to outline the scriptural basis of evil, instruct clergy on evaluating whether a person is truly possessed, and review the prayers and rituals that comprise an exorcism. Among the speakers will be Cardinal Daniel DiNardo, archbishop of Galveston-Houston, Texas, and a priest-assistant to New York Archbishop Timothy Dolan.

"Learning the liturgical rite is not difficult," DiNardo said in a phone interview. "The problem is the discernment that the exorcist needs before he would ever attempt the rite."

More than 50 bishops and 60 priests signed up to attend, according to Catholic News Service, which first reported the event. The conference was scheduled for just ahead of the fall meeting of the U.S. Conference of Catholic Bishops, which starts Monday in Baltimore.

Despite strong interest in the training, skepticism about the rite persists within the American church. Organizers of the event are keenly aware of the ridicule that can accompany discussion of the subject. Exorcists in U.S. dioceses keep a very low profile. In 1999, the church updated the Rite of Exorcism, cautioning that "all must be done to avoid the perception that exorcism is magic or superstition."

The practice is much more accepted by Catholics in parts of Europe and elsewhere overseas. Cardinal Stanislaw Dziwisz, the longtime private secretary of Pope John Paul II, revealed a few years after the pontiff's death that John Paul had performed an exorcism on a woman who was brought into the Vatican writhing and screaming in what Dziwisz said was a case of possession by the devil.

Bishop Thomas Paprocki of Springfield, Ill., who organized the conference, said only a tiny number of U.S. priests have enough training and knowledge to perform an exorcism. Dioceses nationwide have been relying solely on these clergy, who have been overwhelmed with requests to evaluate claims. The Rev. James LeBar, who was the official exorcist of the Archdiocese of New York under the late Cardinal John O'Connor, had faced a similar level of demand, traveling the country in response to the many requests for his expertise.

The rite is performed only rarely. Neal Lozano, a Catholic writer and author of the book "Unbound: A Practical Guide to Deliverance" about combatting evil spirits, said he knows an exorcist in the church who receives about 400 inquiries a year, but determines that out of that number, two or three of the cases require an exorcism.

No one knows why more people seem to be seeking the rite. Paprocki said one reason could be the growing interest among Americans in exploring general spirituality, as opposed to participating in organized religion, which has led more people to dabble in the occult.

"They don't know exactly what they're getting into and when they have questions, they're turning to the church, to priests," said Paprocki, chairman of the bishops' committee on canonical affairs and church governance. "They wonder if some untoward activity is taking place in their life and want some help discerning that."

Many Catholic immigrants in the U.S. come from countries where exorcism is more common, although Paprocki said that was not a motivation for organizing the conference.

Exorcism has deep roots in Christianity. The New Testament contains several examples of Jesus casting out evil spirits from people, and the church notes these acts in the Catholic Catechism. Whether or not individual Catholics realize it, each of them undergoes what the church calls a minor exorcism at baptism that includes prayers renouncing Satan and seeking freedom from original sin.

A major exorcism can only be performed by a priest with the permission of his bishop after a thorough evaluation, including consulting with physicians or psychiatrists to rule out any psychological or physical illness behind the person's behavior.

Signs of demonic possession accepted by the church include violent reaction to holy water or anything holy, speaking in a language the possessed person doesn't know and abnormal displays of strength.

The full exorcism is held in private and includes sprinkling holy water, reciting Psalms, reading aloud from the Gospel, laying on of hands and reciting the Lord's Prayer. Some adaptations are allowed for different circumstances. The exorcist can invoke the Holy Spirit then blow in the face of the possessed person, trace the sign of the cross on the person's forehead and command the devil to leave.

The training comes at a time when many American bishops and priests are trying to correct what they view as a lack of emphasis on the Catholic teaching about sin and evil after the Second Vatican Council, the series of meetings in the 1960s that enacted modernizing reforms in the church. Many in the American hierarchy, as well as Pope Benedict XVI, believe that the supernatural aspect of the church was lost in the changes, reducing it to just another institution in the world.

A renewed focus on exorcism highlights the divine element of the church and underscores the belief that evil is real.

DiNardo said some Catholics who ask for an exorcism are really seeking, "prayerful support. They're asking for formation in the faith." Still, he said sometimes the rite is warranted.

"For the longest time, we in the United States may not have been as much attuned to some of the spiritual aspects of evil because we have become so much attached to what would be either physical or psychological explanation for certain phenomena," DiNardo said. "We may have forgotten that there is a spiritual dimension to people."