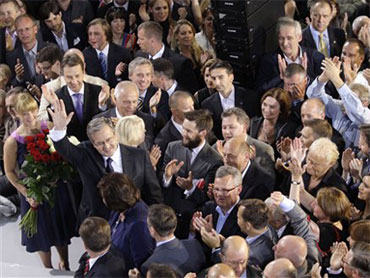 Interim president Bronislaw Komorowski appeared to have held off a last-minute surge from the identical twin brother of the late president, who died in an April plane crash that shocked the country and forced Sunday's early election.

Exit polls showed Komorowski with a slight edge over Jaroslaw Kaczynski, who essentially conceded defeat in the presidential run-off by declaring before supporters, "I congratulate the winner."

The exit polls have a small margin of error, and official results are not expected until Monday.

Komorowski, who wants to smooth the way for the government to continue privatizing state-run companies and trim welfare benefits, didn't formally claim victory, noting that the votes were still being counted.

"Tonight we open a small bottle of champagne and tomorrow we will open a big bottle," he said before a jubilant crowd of party members in Warsaw.

An election was originally set for the fall but had to be called early to replace President Lech Kaczynski, who died April 10, in a plane crash in Smolensk, Russia, along with 95 other Poles. It was the worst tragedy to strike Poland in decades and set a tone for a somber election campaign free of the dirty political maneuvering that often precedes Polish elections.

"We thank everybody — the more so that it was an unusual campaign, a difficult campaign held in the shadow of catastrophe," Komorowski, 58, said.

Kaczynski, surrounded by supporters chanting "Jaroslaw!" essentially conceded defeat at a campaign party in Warsaw held by his Law and Justice party.

The tragedy of his brother's death reshaped the public image of Kaczynski, who only months ago was one of the country's least popular politicians due to his combative and divisive style. Many Poles remember the chaotic government he led from 2006-2007 and his zealousness in trying to eliminate former communists from public life — an approach that critics described as a witch hunt.

Kaczynski's supporters were heartened because their candidate did far better than expected weeks ago, showing a late climb in polls and raising their hopes that he could strengthen the power of his opposition Law and Justice party in future elections.

"I would like to mention here the man, the people who are the reason for our being here: my brother and all those killed in the Smolensk catastrophe," Kacyznski said. "Let us remember them because this result grew out of their martyr-like deaths. A new quality grew out of my brother's work and service, a return to values, a return to patriotism."

Both presidential candidates were former anti-communist activists, but Kaczynski is a nationalist who has worked to promote patriotic and conservative Catholic values, making him popular among rural Poles and older voters, especially those who remember the suffering inflicted on Poland by Germany and the Soviet Union during World War II.

Komorowski, the scion of an aristocratic family, has a traditional Catholic background but he favors a greater separation of church and state and has stressed the need to look to the future and modernize Poland, the largest of the ex-communist countries to join the European Union in recent years.

Poland's president has many ceremonial duties, but he can also veto laws, and as commander in chief has influence on foreign military operations.

Komorowski's victory would be a huge boost to the pro-EU and pro-business government of Prime Minister Donald Tusk. He is a key member of Tusk's Civic Platform party and would not be expected to veto any new legislation it proposes, including plans to raise the retirement age and trim the welfare state.

"If this result is confirmed, this will be one of the happiest days of my life," Tusk said.

The state electoral commission said that with 21 percent of polling stations reporting, Komorowski had 50.61 percent of the votes and Kaczynski 49.39 percent.

Komorowski would also support the government's efforts to heal old wounds with Germany and Russia.

Observers note that with Komorowski as president, Tusk would have no excuses now not to push through promised reforms — some of which could be painful for voters and could hurt Tusk's party in next year's parliamentary elections.

"If the prognosis is confirmed, it will be a dubious victory for Civic Platform because then they will not be able to say that the opposition is hampering their work," noted Pawel Poncyljusz, a leading member of Kaczynski's Law and Justice party.

Kaczynski toned down his combative and anti-communist style but kept his conservative views on family life and stressed his Catholicism. A noted euroskeptic, Kaczynski vowed to fight for more EU funds to help Poland's poor farm regions and is reluctant to set a timetable for the adoption of the euro. Polish businessmen tend to favor the euro, while consumers often express concern that it could raise prices.