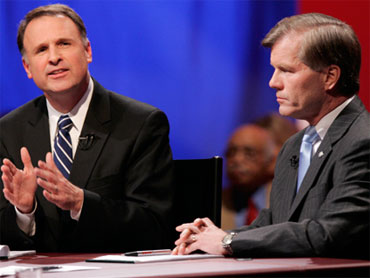 (AP)
As voters in Virginia and New Jersey headed to the polls today to elect their governors, Americans across the country were watching these off-year races for implications about the nation's mood heading into 2010.

In Virginia, Republican Bob McDonnell and Democrat R. Creigh Deeds are battling to succeed the term-limited sitting governor Tim Kaine in what is widely viewed as a potential swing state in the future. In New Jersey, Democrat Jon Corzine is the only incumbent governor in the country to face a re-election challenge this year against Republican Chris Christie and independent Chris Daggett.

In both states the economy topped the list of issues that mattered most to voters in their choice for governor – in Virginia health care was second, while in New Jersey the second choice was property taxes.

And what about the Obama factor? President Obama campaigned for both the Democratic gubernatorial candidates, even visiting New Jersey as recently as Sunday to stump for Jon Corzine. 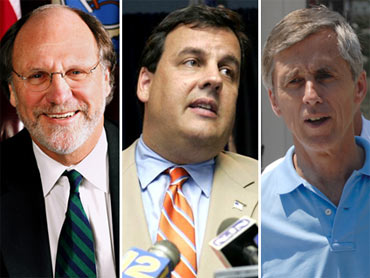 (CBS/AP)
Still, majorities of voters in both states (56 percent in Virginia and 60 percent in New Jersey) said President Obama was not a factor in their vote today. Those who said Mr. Obama was a factor in New Jersey divided as to whether their vote was a vote for the president (19 percent) or against him (19 percent). In Virginia, slightly fewer voters said their vote was for Mr. Obama (17 percent) than against him (24 percent).

Among Corzine supporters in New Jersey, 38 percent said one reason for their vote was to express support for Mr. Obama, while 39 percent of Christie voters said it was to express opposition to Mr. Obama.

This campaign cycle has seen its share of negative advertising in both Virginia and New Jersey.

Over in New Jersey, the Democrat is also seen as more on the attack. 73 percent of voters said Corzine has attacked Christie unfairly; though 62 percent viewed Christie as attacking Corzine. Corzine has spent approximately $24 million on his campaign, compared to Christie's $12 million.

About half the voters in each state (57 percent in Virginia and 50 percent in New Jersey) said campaign advertising was a factor in their vote for governor today.