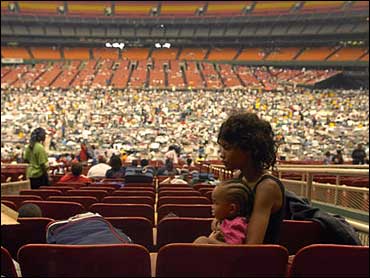 The triage line inside the Houston Astrodome hasn't changed much since the buses with hurricane evacuees began arriving from New Orleans.

It's long with tired, ailing refugees, some in wheelchairs, some on crutches, some critical, some not, but every one of them waiting on a doctor.

There are, give or take, roughly 50 doctors, paramedics and nurses on hand to treat the Astrodome's thousands of new residents.

Meanwhile, the frantic search for family in the Astrodome continued. CBS News Correspondent Trish Regan reports that inside the stadium, there are phones available to call loved ones – but too often these calls end in disappointment.

"Nobody's not answering any phones, not any phones is working," said Tyheasha Crumedy.

The number of evacuees at the Astrodome has been capped at 8,000 after officials decided against housing 25,000 there.

Officials decided in the wee hours Friday that it wouldn't be safe to hold 25,000 hurricane victims at the Astrodome, as originally planned.

Instead, they capped the capacity at 8,000, and the county fire marshal halted the flow of the homeless.

The new plan is for the dome to serve as the primary checkpoint for many evacuees coming into the state. That's also where they will get free medical screenings. Officials will then decide where the travel-weary go next.

"This is really about America coming together," he said.

In San Antonio, almost 2,000 evacuees had arrived by early evening, turning one of the Alamo City's military installations into a makeshift camp that could be home for thousands more for up to three months.

"We have ambulances for emergency medical needs, doctors and even ministers to meet their religious needs," said Randy Jenkins, San Antonio district fire chief and public-information officer for the refugee center at Kelly USA, a former Air Force facility.

In less than 24 hours, city and military officials, working with an army of volunteers, turned two sprawling warehouses into temporary housing for up to 7,000 people, Jenkins said.

The evacuees, arriving by private vehicles and commercial and military aircraft, were processed by officials to help ensure that families remained together and their needs assessed and met.

Regan reports that many families making the journey to Houston became separated on the way. Still, the desperate search has paid off for some. Torrey McKenzie thought she had lost her six children and finance when the good news came: her family is on their way to join her in the Astrodome.

In Houston, after the Astrodome filled up, two convention centers that can house a total of 19,000 people opened.

Harris County Judge Robert Eckels estimates that more than 100,000 evacuees are in the Houston area, living in hotels, friends' houses and shelters.

The state's housing, education and employment agencies are also assisting those displaced by the hurricane.

Classrooms need to be found for 6,000 to 8,000 school-age kids who are at the Astrodome, Perry said. Because of the emergency declaration he signed Thursday, college students from other states can attend Texas public universities for in-state prices.

The Astrodome has not seen anything like the kind of violence on display at the Louisiana Superdome, said Lt. Joe Leonard of the Coast Guard, who is overseeing the Astrodome operation.

Two evacuees died in Houston. One was an older woman with a history of cancer, the other an older patient who had had chest pains, said Kenneth Maddox, who is overseeing the medical team at the Astrodome.

Dr. Steven Glonsky, a surgeon who worked a 13-hour volunteer shift at the Astrodome on Friday, called the medical situation "a crisis" because of a lack of doctors.

Maddox disagreed: "At any given hour, there may be peaks and valleys. We do have a sufficient number of doctors and nurses."