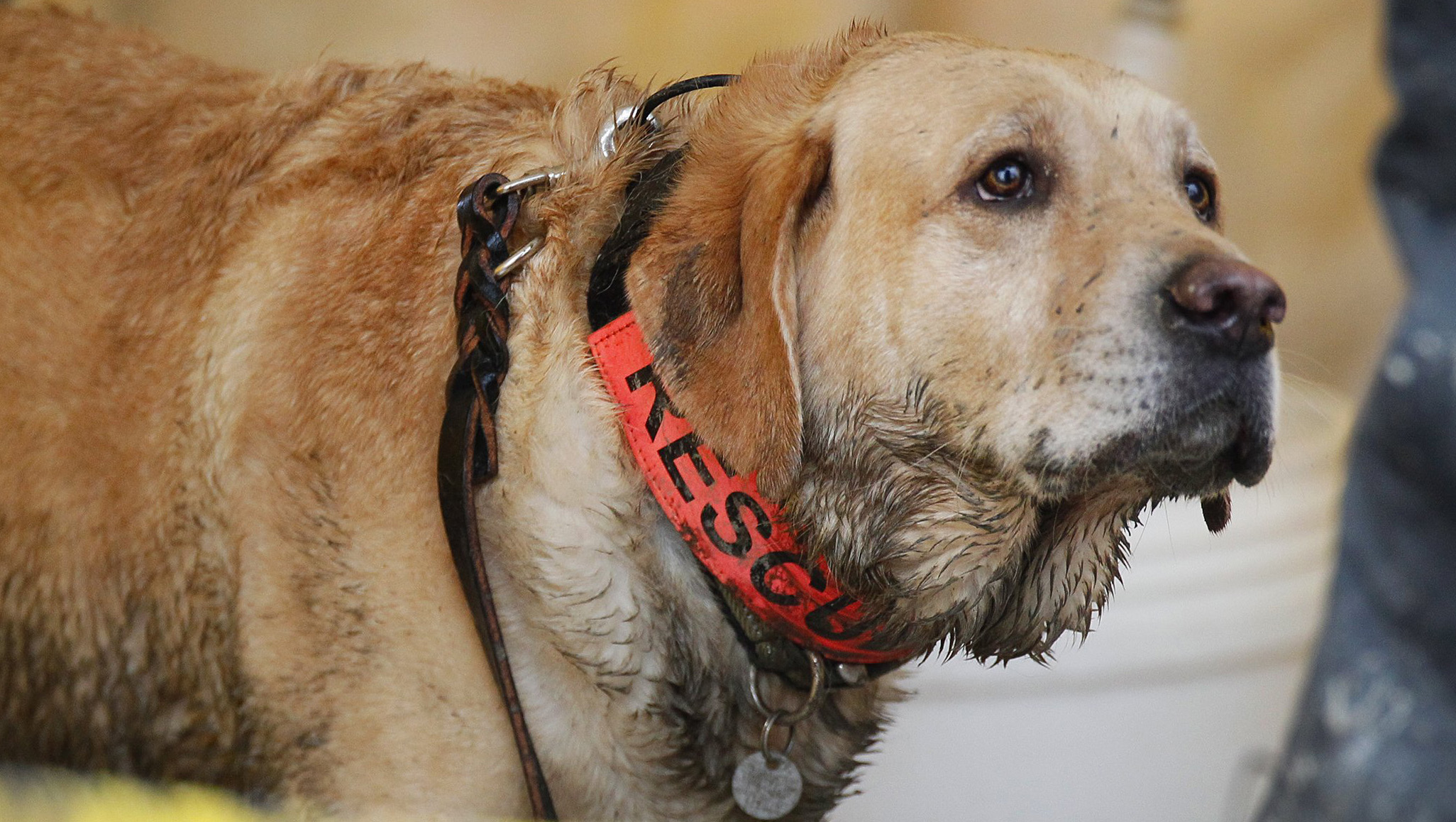 DARRINGTON, Wash. - The death toll in the deadly mudslide that buried the mountainside community of Oso rose to 21 on Sunday, as rescue crews said many of the dogs that have been essential in the search for victims will take a two-day break after long hours in the cold and rain.

The dogs can lose their sensing ability if overworked, officials said.

"The conditions on the slide field are difficult, so this is just a time to take care of the dogs," said Kris Rietmann, a spokeswoman for the team working on the eastern portion of the slide, which hit March 22 about 55 miles northeast of Seattle and is one of the deadliest in U.S. history.

Dogs from the Federal Emergency Management Agency that arrived more recently will continue working, said Heidi Amrine, another spokeswoman for the operation.

On Sunday evening, the number of people who have been confirmed dead increased from 18 to 21, said Jason Biermann, program manager at the Snohomish County Department of Emergency Management.

Fifteen of the victims have been identified by the Snohomish County medical examiner, and six have yet to be identified, Biermann said.

Another four bodies were found in the debris field on Sunday. About 30 people remain missing.

Crews have completed a makeshift road that will link one side of the debris field to the other, significantly aiding the recovery operation.

They have also been working to clear mud and debris from the highway, leaving piles of gooey muck, splintered wood and housing insulation on the sides of the road.

Searchers have had to contend with treacherous conditions, including septic tanks, gasoline and propane containers. When rescuers and dogs leave the site, they are hosed off by hazardous materials crews.

The slide dammed up the North Fork of the Stillaguamish River, causing water to pool up on the east side. The river cut a new channel through the mud, but the rain has raised the water level nearly a foot, Rietmann said.

In at least one place, the water level got so high that it covered areas that have already been searched, said Tim Pierce, leader of Washington Task Force 1, a search-and-rescue team.

"At this point, there's no point in searching (that area) again until the water drops back down," he said.

Rescuers should get some relief soon. Conditions were improving Sunday, and mainly dry weather is forecast Monday through Wednesday in western Washington.

The size of the debris field is also smaller than initially thought, officials said Sunday. After review and analysis, geologists have determined it is about 300 acres - just under half the size of an earlier projection of 1 square mile.

Away from the whirring chain saws and roaring bulldozers, many residents of nearby Darrington sought comfort in church services.

"I can only compare it to a hot, hearty meal after a very cold day," said Slava Botamanenko, who works at the hospital in Arlington. He said he spent two nights there to be sure he was available for work after the mudslide blocked the road.

All week, a steady stream of people has stopped in to pray at the Glad Tidings Assembly of God on the edge of town, said Lee Hagen, the senior pastor.

"At a time like this, everybody knows they've got to have God's help," he said.

Country singer Susie McEntire, sister of Reba, performed for the congregation Sunday, crooning: "You'll get through this and you'll break new ground."

The Rev. Owen Couch, a chaplain for the fire district in Darrington, said he's worried about the first responders.

"My concern is when this slows down and they're not going full tilt, and they have time to kind of reflect on what they've seen and what they've done," he said. "That's when the critical incident stress starts to kick in."

Steve Huot, lead chaplain for the Arlington Fire Department, said he is seeing people in various states. Some are in shock, while others have begun to grasp the reality of the disaster. Many are exhausted.

"It's more about listening right now. You need to encourage them and maybe change their focus to staying busy for the group, for the team," he said.