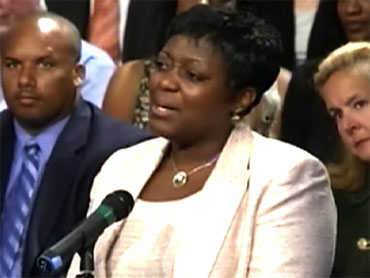 Velma Hart became political fodder for both political parties when she told President Barack Obama at a town hall meeting earlier this fall that she was "exhausted" by defending his economic policies.

The right said the moment was a sign that his key supporters, even African-Americans, were fed up. The left said it showed that his policies were not strong enough.

Two months later and what it really shows is that Hart's concerns were all too prescient. She was let go as the chief financial officer for Am Vets, a nonprofit Maryland-based veteran services organization, reports The Washington Post.

"It's not anything she did," Jim King, the national executive director of Am Vets told the Post. "She got bit by the same snake that has bit a lot of people. It was a move to cut our bottom line. Most not-for-profits are seeing their money pinched. Velma was a good employee."

Hart first gained notoriety during a CNBC town hall meeting with President Obama designed to discuss his economic policies. Hart, after telling friends for a while she wanted to write President Obama a letter regarding her fears, let go and had a candid moment with him in front of the cameras.

"My husband and I joked for years that we thought we were well beyond the hot-dogs-and-beans era of our lives," she said during the CNBC town hall broadcast. "But quite frankly, it's starting to knock on our door and ring true that that might be where we're headed again. And quite frankly, Mr. President, I need you to answer this honestly: Is this my new reality?"

While Hart declined to discuss her firing, she did speak to the Washington Post's Michelle Singletary shortly after the CNBC footage hit the airwaves. She told Singletary that she has two daughters in private school, and the oldest is looking at colleges. Although her husband is employed, she was concerned about higher consumer prices. She talked about her home value being down. She talked about feeling anxious.

"You don't have to be on the street to be struggling," Hart said in the earlier interview. "There are different degrees of struggling."