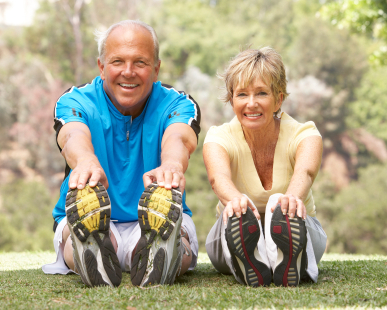 (CBS News) The benefits of exercise in people with heart problems may go beyond the physical.

According to a new study from Duke University researchers, patients with chronic heart failure who exercise have modest reductions in depressive symptoms within 12 months.

"Compared with guideline-based usual care, exercise training resulted in a modest reduction in depressive symptoms, although the clinical significance of this improvement is unknown," the authors wrote.

According to the authors, an estimated 5 million people in the U.S. have heart failure, with more than 500,000 new cases diagnosed each year. Forty percent of the patients will also have depression, and up to 75 percent of patients saying they feel a rise in depressive symptoms.

Even mild cases of anxiety and depression can lead to an early cardiovascular death, according to a recent British Medical Journal study. The greater psychological stress a person faced, the more likely they were to die.

For the study, 2,322 stable patients treated for heart failure at 82 medical clinical centers in the United States, Canada, and France were asked to rate their depressive symptoms via a questionnaire that scored patients from 0 to 59. Scores of 14 or higher were considered clinically significant for depression. The median score for the subjects was 8, with 28 percent of the subjects scoring 14 or higher.

Then, participants were either asked to perform supervised aerobic exercise - with a goal of 90 minutes per week for months one through three, followed by home exercise with a goal of more than 120 minutes per week for months four through 12 - or were assigned to usual guideline-based heart failure care along with education on exercises' benefits . Those who exercised rode a stationary bike or used a treadmill.

A closer look at the 28 percent of patients who had clinically significant depressive symptoms showed similar trends in depression scores between the exercise and guideline groups. The more depressed a person was, the more they seemed to improve with exercise. After the one year point, depressed patient scores were about 1.5 points better in the exercise group compared to those assigned to usual care.

The results show that exercise "is in the same ballpark" as other established treatments, particularly antidepressant medications, James Blumenthal, a psychology professor at Duke University Medical Center, told WebMD.

After 30 months, the exercise group had a slightly lower risk of hospitalization and death. It wasn't statistically significant, but because there were so many people in the study it was highly unlikely it was due to chance.

"It doesn't require intensive training for a marathon to derive benefits," Blumenthal said to TIME. "We're talking about three, 30-minute sessions for an accumulated 90 minutes a week. And the results are significant improvements in mental health, reduced hospitalization."

The study was published in the August issue of the Journal of the American Medical Association.