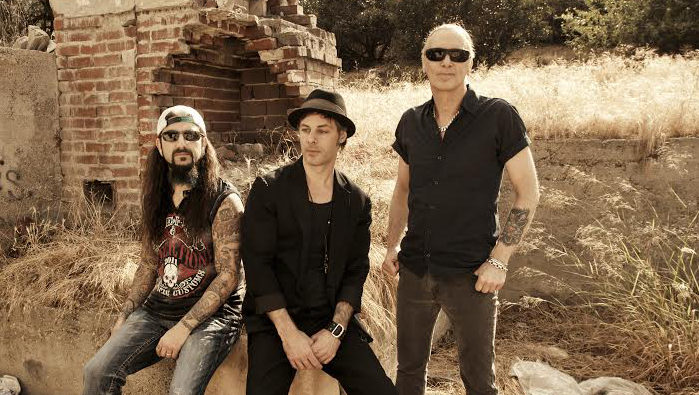 As soon as the guys from The Winery Dogs started playing "I'm No Angel" live, they quickly witnessed the song turning into a crowd-pleaser. So, deciding to make a video for it was a no-brainer for singer/guitarist Richie Kotzen, drummer Mike Portnoy (co-founder of Dream Theater) and bassist Billy Sheehan.

"We pulled it together really quick because we're not always in the same city at the same time," Kotzen told CBS News about the video, directed by Vicente Cordero and shot over one day in Los Angeles.

The song appears on the rock group's 2013 self-titled debut album and is also part of the newly-released "Special Edition" collection released last month. The set features two discs, including "Unleashed in Japan 2013," a live disc made up of 10 tracks captured in concert last July.

The Winery Dogs will be on the road this summer, touring North America from now through August.

We recently caught up with Kotzen about "I'm No Angel," the video treatment and band's future plans. And check out the "I'm No Angel" video below, making its premiere on CBSNews.com:

On story behind "I'm No Angel": "It was just something that I had originally demoed and it was just sitting on my hard drive and we were looking for some new songs to add to the ones we had written...and that one just really struck a chord with the other guys. So, we decided to work it up and turn it into a Winery Dogs song. It seems to be a song that the audience really connects with as well. We always hang out after the show and have the opportunity to meet some of the fans. It's one of the songs that everyone talks about."

On the sound of "I'm No Angel": "The first thing that you hear is the guitar riff, which is a unique thing I'm playing there...It almost sounds like it would be two guitars but it's actually one. It's kind of tricky to play because I'm playing a single note and I'm bending a higher note...but that riff when it's played correctly is kind of interesting and it's effective. And I think it catches people. And then from there obviously the band comes in and the vocal melody follows that and so it's easy to register in your mind what you're hearing."

On the lyrics and meaning of "I'm No Angel": "Lyrically, it's kind of a dark song in a sense that it's a relationship song but it really deals with the kind of relationship where one person is basically being a total jerk, I don't know, a low-life -- and they know they are. And they may want the relationship but they can't change their devilish ways. So basically chorus alludes to the fact that...I've got nothing that you need. I'm not going to be the person you want me to be. But you keep coming back and as long as you keep coming back, it's always going to be the same thing. You make efforts to try to change and you kind of dangle that carrot of maybe I'll change...maybe if you stick around long enough, but in the end, the person doesn't. And that's what we tried to get across in the video."

On the video treatment: "We wanted to have shots of the band performing but the storyline plays right into the lyrics. The girlfriend comes home and there's the dude sitting there, pulled an all-nighter. There's empty bottles everywhere and random party people that scatter when she comes in...It goes on and she tries to reach out again. And he's done it again: He's in bed with a woman. And in the end you realize after all this nonsense, now he's having another party and he actually hired a band to play, so it's more chaos. And then the final touch is the rose petals where you see she thinks, 'Maybe it's for me.'"

On the band's live shows: "On the record, you have the songs and the lyrics and the parts that we play...But we have built into our music an opportunity to really improvise in some of the solo sections. So, when we get into those jams we really don't know what we're going to do until they happen. And that to me is exciting. That's what keeps the live shows interesting...We're also listening to each other...I'm really happy we're able to incorporate that into our band."

On what's next: "I'm sure we'll want to take a little breather to regroup, but I think the plan is to come back next year and release another record next summer and start all over again."