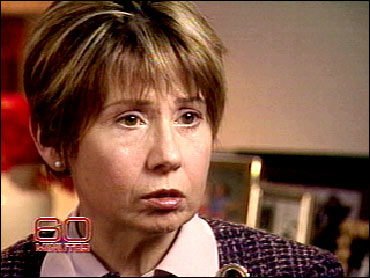 It's true, the circus has something for everyone: music and mystery and fun, death-defying and side-splitting.

Ringling Brothers is also a highly profitable enterprise under the tight control of a private company - Feld Entertainment - and its CEO, Kenneth Feld.

Among other things she was critical of the way the circus treated its performers, and reported that Feld's father, now deceased, had been a bisexual philanderer. Hardly anyone noticed the article and the circus offered no reaction - at least not publicly. Pottker also had a plan to write a book on the Feld family. It went nowhere.

"In 1998, more than eight years later, there's a knock on my door. It's a private detective," says Pottker. "He said that a former chief ex-chief financial officer of Ringling Circus wanted to talk to me. And it was all very cloak-and-dagger and quite mysterious."

Pottker agreed to meet the former chief financial officer of the circus, Charles Smith, at a suburban Washington restaurant. They talked for over an hour.

Pottker said Smith told her shocking things. "Horrendous things," she says. "He told me that I had been surveilled for eight years by the Ringling Brothers Circus."

Did he tell her that Feld was behind this surveillance?

"He told me absolutely," says Pottker. "He was the one who told me that when my article came out in 1990, Kenneth Feld said that he wanted to ruin my life."

In a deposition, Smith denied he said Feld wanted to ruin her life, but admits he told her that the circus had hatched a scheme to stop her from writing anything else about the circus. Smith knew about the scheme because he'd been part of it.

His motives for spilling the beans are unclear. But he'd had a falling out with Feld and was suing for wrongful dismissal. He also told Pottker that if she wanted proof of what he was saying, she should check court papers that he'd filed in his suit against Feld.

Pottker and her husband did just that in November 1998.

"We went through his papers and we found an affidavit by Clair George stating that he was the person who had been hired by Ken Feld to surveil me, a suburban soccer mom," says Pottker.

Enter Clair George. If that name seems familiar, it should. He was the former deputy director of operations for the CIA and head of covert operations.

George was questioned in a deposition by Pottker's lawyer. In his deposition, George said that undertook a series of efforts to find out what Pottker was doing to the Felds: "Where she was digging up scurrilous information to attack the Feld family."

In 1992, George had been convicted of lying to Congress about the Iran-Contra affair, but the first President Bush pardoned him before he served any time.

"When I saw Clair George's name, and knew of course his involvement with Iran Contra, and knew, knew that he was a CIA covert operations man, I became frightened," says Pottker. "I thought I would faint."

Pottker was so upset she made an appointment with her psychiatrist.

"And even though she had known me for a few years, I was afraid she would think I was nuts," says Pottker. "Miss Paranoid, if I came in saying, 'The CIA is following me.'"

"I brought these pieces of paper in to her and said, 'Here, look at this.' I asked her 'What's your professional opinion?' She looked at the papers, the documents on me, and she said, 'Holy sh--,'" says Pottker.

At their meeting, Smith, the former circus executive, told her about another strange character.

"He told me that someone had entered into my life, someone who I didn't know, was working for Ken Feld and Ringling Brothers," says Pottker.

She discovered who that someone was in Smith's court documents, where she found a series of highly detailed memos. It was someone she'd met n 1993 at the Potomac, Md., library, where she was giving a talk on a book she'd written.

Who is this man called Robert Eringer?

Eringer was certainly a confidence man in one sense. He was hired by George to gain Pottker's confidence.

During his deposition, Eringer said that one of the reasons why he approached Pottker was because George had asked him to. He said that he was paid to contact Pottker and communicate with her. He also said that he understood that the funds were coming from the circus.

Eringer and Pottker met often in a restaurant in Washington, D.C.

"Robert Eringer and I would sit," says Pottker. "We would meet in the early evening over a glass of wine and we would chat about different ideas."

Did Pottker in any way confide in him about her thoughts or feelings about the circus and Feld?

"He put in personal things about me, ridiculous things. Where I was getting my hair styled. Where my family was going on vacation."

But the plan went beyond merely keeping tabs on her, as George made clear when he went on the attack.

"Well, Ms. Pottker is a professional mudslinger who was spending most of her time writing derogatory and tasteless pieces about the Feld family," said George in his deposition. "It came to my attention that they were concerned and it so came to pass that we decided that we would lead her astray from that and have her do something else."

The fact is, the only thing she'd ever published about the circus was that one article, a version of which later appeared in a book she wrote on family businesses. Nevertheless, the plot to divert her, as this early memo from Eringer demonstrates, was getting into high gear.

In his memo, Eringer wrote: "It is our intention to monitor Pottker closely...we need a hook...we commission Pottker to write a book...The book will side-track Pottker for many months to come -- probably a couple of years -- and this will mean she must relegate any possible Ringling book to a back-burner."

Pottker spent almost a year researching and writing a book. What she didn't know was that her book deal was being paid for with the circus' money, channeled through their man, Eringer.

In his deposition, Eringer said that he obtained the money, about $25,000, from George. He also understood that George had gotten the money from the circus.

Still unaware of Eringer's real mission, Pottker worked with him on another project -- a celebrity guide to Washington, D.C.

"And finally, at our last meeting, he says, 'Jan, I have another idea. Let's put this guidebook' now it's a map and address book to people in Washington,'" says Pottker. "'Let's put this guide book into verse. Let's make poems about everyone.' And that's when I had it. I said, 'No, Robert. We are not doing this.'"

Allen Bloom, who was head of marketing for the circus, told Feld he thought diverting a writer was a bad idea.

In his deposition, Bloom was asked to recall what Feld said when he informed him that he didn't approve of it.

What did he think Feld meant by those words? "He was going to do what he wanted to do," says Bloom.

"For eight years they played with my life," says Pottker. "I was a puppet on a string."

Feld Entertainment, based in Vienna, Va., declined to discuss the case. In a letter, it said it has denied the allegations of the suit and that it is vigorously defending its position. In a court document, their lawyers did admit that Clair George was hired to both gather information about Pottker and "attempt to interest her in projects other than the circus."

How much does Pottker believe that Feld, and the circus, paid for this operation?

Pottker is now suing Eringer, George and Feld for fraud and conspiracy.

"It's the only legal thing I can do," says Pottker. "I can't do what Ken Feld does, and hire people for dirty tricks."