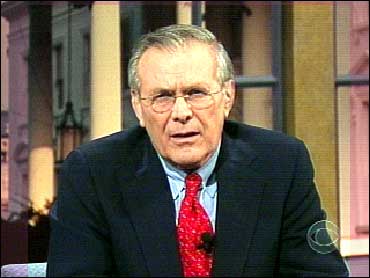 President Bush got the first word that U.S. Forces believed they had Saddam in custody from Defense Secretary Donald Rumsfeld.

Secretary Rumsfeld talks to Lesley Stahl about what the capture of Saddam Hussein means for the future of American presence in Iraq and what it also means for the Iraqi people.

Lesley Stahl: Mr. Secretary, thank you very much for joining us this evening. I guess the big question today is, does the capture of Saddam Hussein now mean Mission Accomplished?

Secretary Rumsfeld:Well, certainly not. The goal with respect to Iraq is to assist that country in assuming sovereignty and to assume the responsibility for its own security and to see it on a path of economic recovery -- a nation that is whole, that is at peace with its neighbors, and is respectful of the various ethnic and religious elements within the country.

That's the goal, that's the path we're on. Certainly, the capture of Saddam Hussein is important. It's important because he was a vicious dictator. He killed tens of thousands of people. He tortured people; used gas on his own people. The fear factor as long as he was loose and people could imagine he could come back and repress them once again, the fear factor was sizable. So it is an important step along the way, but clearly there are challenges ahead.

Lesley Stahl: The president said today he didn't expect this capture to end the violence, and I've heard people suggest that the violence might even increase. What is the significance really of the capture? What does it change?

Secretary Rumsfeld: It changes what I just said it changes. It takes away the fear that this man could conceivably come back and restore the Ba'athist regime that kills tens of thousands of people, creating mass graves and tortured people. He's not coming back and that's what changed and it's obvious what changed.

Secretary Rumsfeld: Well, first of all, he was found with a sizable amount of money. And one of the things that the Saddam Hussein family and his clique of intimates were doing is they were providing money to people to go out and engage in acts against the coalition and against the Iraqi people. So that's ended, and that's a good thing, and the someone is now our hands and the hands of the coalition rather than in the hands of people whose goal is to go out and kill innocent men, women and children.

Second, the knowledge that existed with him is now no longer operational. Where money was, who was doing what. He now is out of commission, out of circulation and that's a good thing.

Lesley Stahl: While he has been in custody for about 30 hours now,
when those pictures were taken at the beginning, when he was being examined he looked pretty compliant but then some Iraqi officials met with him and said he was defiant. What can you tell about his demeanor, his behavior so far?

Secretary Rumsfeld: I think the notable things are that he had a pistol. Here was a man who was photographed hundreds of times shooting off rifles and showing how tough he was, and in fact, he wasn't very tough.
He was cowering in a hole in the ground and had a pistol and didn't use it. And certainly did not put up any fight at all.

I think that ... he resulted in the death of an awful lot of Iraqi people, and in the last analysis, he seemed not terribly brave.

Second, he has not been uncooperative in terms of talking or anything like that. He clearly was compliant or resigned in effect has he was being examined and as he was being transferred from the hole to the transport that took him away.

But I would not say that he is... I think it's a bit early to try and characterize his demeanor beyond that.

Secretary Rumsfeld: He's obviously not been living a good life lately
spending all of his time running hiding and moving frequently. Even during the war, we had information that he moved around Baghdad in a taxicab, and, in fact, some nights even slept in a taxicab. So it was not a surprise to see there was a taxicab in the farmyard near where he was, in fact, captured.

Lesley Stahl: Really? Do you think that's the one he was driving around in?

Secretary Rumsfeld: Well, I don't know that but it's a reasonable assumption it was one of the ones he moved around in. His circumstance is he is at an undisclosed location for obvious reasons. He is being accorded the protections of a prisoner of war and his treatment will be governed by the Geneva Convention.

Lesley Stahl: The Red Cross can see him soon?

Secretary Rumsfeld: Those are judgments that will be made by the lawyers as we go along, but one need not worry that he'll be treated in a humane and professional way.

Lesley Stahl: There have been some suggestions he might try and
bargain – that he'll say, "I'll tell you something about weapons of mass destruction or whatever it is, if you will spare my life." Would we engage in a negotiation with this man?

Secretary Rumsfeld: The treatment of a person in his circumstance, it seems to me, it's going to end up being discussed by the coalition at a high level,and lawyers will be involved and I think it's a bit early to begin making snap decisions about what might be done.

But I think that in the last analysis, here's a man who has killed so many tens of thousands of people, who will have to be held accountable, and brought to justice in some form in some way.

Lesley Stahl: Now, you said he would be treated as a prisoner of
war:

Secretary Rumsfeld: No ... he would be accorded the privileges and as though he were a prisoner of war, not that he necessarily is one. And I say that advisedly.

Lesley Stahl: What is the distinction?

Secretary Rumsfeld: We don't know yet, but to the extent that he was involved in the insurgency ... that one would... a lawyer might say
something either different from or in addition to. That's why i just said he
would be accorded the protections for the time being of a prisoner of war and certainly his treatment would be governed by the Geneva Convention.

Lesley Stahl: Let me raise the whole question, for lack of a better
term, torture. Let's say he's not forthcoming. Would we deprive him of sleep, make it very cold where he is, or very hot? Are there any restrictions on the way we treat him to get him to cooperate more than he has been?

Secretary Rumsfeld: You know, to even raise the word torture in terms of how the United States military would treat this person seems to me is a unfortunate. We don't torture people and here's a man who has tortured to
death tens of thousands of people, conducted rape and brutality the likes of which would be difficult to find a more vicious and brutal dictator in our adult lifetimes. And I just told you he would be treated according to the Geneva Conventions and to suggest that any one would be engaged in torture or conduct inconsistentent with the Geneva Convention seems to me isn't on
the mark at all.

Lesley Stahl: Sleep deprivation, that kind of thing. You're ruling it completely out, is that what you're telling us?

Secretary Rumsfeld: I'm not telling you anything other than I have just told you. He'll be treated according to the Geneva Convention and given
the protections of a prisoner of war.

Lesley Stahl: It's been suggested to us that Iran may have helped in
the capture of Saddam Hussein. Is that true?

Secretary Rumsfeld: I suppose I should always say not to my knowledge. I have certainly heard nothing to begin to suggest that. The reason he was finally captured was because wonderful young men and women in uniform had been over there for 7, 8 months, had been doing a wonderful
job for our country and for the Iraqi people. And helping to set that country on a path.

And they have developed an ability to deal with a high value target like Saddam Hussein, to do it in a time sensitive way. And when the intelligence was gathered and analyzed, brought together over a period of some hours and days, they were able to then move very rapidly and very skillfully and very professionally and capture that individual.

Lesley Stahl: How you would say that the capture, and where we are right now so far in the war in Iraq, or the situation in Iraq, how is that affecting the overall war on terror? Specifically, how does it relate to Osama Bin Laden, if at all?

Secretary Rumsfeld: Well, if you think about it, Saddam Hussein had the aspirations to be a leader of the entire region. He had very inflated views of himself and his role in the world. And to have him go out the way he has gone out, with a whimper, it seems to me deflates those that would have wanted to support that approach to the world.

And it allows the people who believe in freedom and liberty, and want to have respect for the various religious and ethnic groups in that country and
region, allows those people to be more confident about their future and more optimistic. And I think the hope that will come as a result of this is something that is not quantifiable but I think it will be palpable.

Secretary Rumsfeld: Well that's a fair question. You know, I have a lot of things I worry about and try and think through, and that was one thing I could do nothing about. We either were going to kill him or capture him, and our policy is we try and capture and not kill and if we're not able to capture and we can kill, we do it.

But it was something that the facts on the ground were determined, and we were prepared for it either way. And had thought through what might be the appropriate circumstance in each case.

Lesley Stahl: Can you tell us when you told President Bush about this? You were the first.

Secretary Rumsfeld: I called him up and said first reports are almost always wrong and I don't want him to take this aboard as a fact, but that it appears we have Saddam Hussein in custody, and our forces, the 4th Infantry Division, and special operations forces near Tikrit.

And he said, 'Well, if you're cautioning me on first reports, it must be good news, and it is good news and that's terrific. And he asked about how we seemed to think it was Saddam Hussein besides the fact he looked like it.
Of course, the answer was that some people put some weight in the fact he had a bullet hole in his left leg and tattoos.

I was more interested in the fact we found a sizable amount of money, because we know Saddam Hussein had doubles and used plastic surgery, so could have easily put the tattoos and the bullet hole when they did facial
surgery. It was the fact that he did money and positive identification by some of his cabinet after we captured him.

Lesley Stahl: Mr. Secretary, thank you very much for being with us
tonight.

Secretary Rumsfeld: Thank you very much.