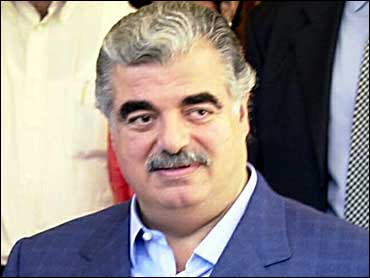 In an exclusive interview, CBS News Anchor Dan Rather speaks with Lebanese Prime Minister Rafiq Hariri about the concern that the Mideast conflict could expand northward into Lebanon, if border attacks by Hezbollah guerrillas provoke an Israeli invasion.

Rather: Mr. Prime Minister, do you personally expect Ariel Sharon to send an Israeli ground operation into southern Lebanon?

Rather: If Ariel Sharon and the Israelis should open even aerial attacks, much less a ground attack, what will happen?

Rather: That's my question and then what?

Hariri: Exactly. We can argue whose mistake it is. But then what? Do we want to live in war? Do we hate each other until to the extent that we want to destroy each other? The point is how we end this? We can argue me and you until tomorrow, who is making mistakes but this does not change the reality on the ground.

Rather: Can you exert control over Hezbollah, in the southern half of your country?

Hariri: In what situation, if there is a peace?

Rather: For Israel's security.

Hariri: If there is a peace all the countries in the region will co-operate together to assure the security of each other.

Rather: The belief is widespread in the United States that Yassir Arafat had 95% of what he had asked for on the table and he walked away from it.

Hariri: Why 95 percent, why not 100 percent? All the territory that has been occupied in 1967 against peace and normal relations with Israel it means 100 percent. It doesn't mean 99 percent. I think if you want peace you have to give me what is mine. Sheba Farm, I know so many people who say, what is Sheba Farm, it is just a small piece of land. Yes but it is our land.

Rather: And if the Israelis agree to do that what do they get?

Rather: Mr. Prime Minster, if President Bush were to say to you, how do we stop suicide bombings, sending young Muslim people to their own certain death and doing evil deeds, how do we stop that?

Hariri: Surely 100 percent we cannot stop them by what Sharon is doing. It won't stop and by the contrary it might exceed it. Secondarily the answer is the same, peace peace and peace.

Rather: And to those Israelis who say listen the only thing they understand is the fist?

Hariri: You think it works, it will not work, it will never work. You cannot take 2 million people and jail them. What has to happen today, they have to stop and they have to withdraw. United States has to play its role as the greatest country in the world, because you have all kinds of arms? Not because of that...because we believe you are a democratic society, you believe in human rights. You believe in the law. We need your help to achieve peace in the region without you we cannot make it ok? We cannot do it.