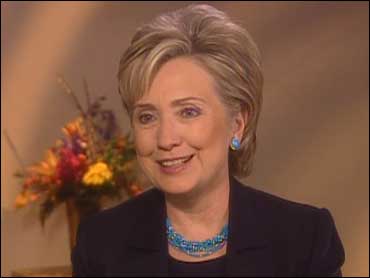 With the Iowa caucus just more than a month away, CBS News anchor Katie Couric sat down for an exclusive interview with Democratic frontrunner Sen. Hillary Clinton.

She's the woman on everyone's mind right now. But polls in Iowa are showing the race could shape up to be very close. Couric asked Clinton if she's lowering her expectations as the primary approaches.

"I never raised them, when I got into race … [I] was so far behind in Iowa it was embarrassing," she said. Her campaign instead is "encouraged" she said, because "we're making progress - but I take nothing for granted, this is going to be a tight race."

Couric asked Clinton: "Many of Obama's supporters urged them to fight back. Some people interpreting that as your campaign being nervous."

"Not case at all. Campaigns have rhythm. We're now down to end. We're going to have a mad dash to Iowa caucuses, mad dash to New Hampshire and then keep going," she said.

Has her campaign gotten more aggressive?

"I have absorbed lots of attacks - my opponents have basically had a free reign," she said. Clinton said she wants voters to know how her plans - particularly health care - stack up against those of other candidates. She named Obama's plan particularly.

"I figure it's about time to draw contrast," she said. "And that's what I'm going to do."

But it was announced today that Oprah Winfry campaigning with Obama in three key states.

"I think it's great. I'm proud to have lots of distinguished Americans [supporting me]," Clinton said.

Is she concerned Obama will get a major boost from Winfrey's enthusiastic fan base?
"No," Clinton said. "At the end of the day … I'm proud to have my husband support me … with his knowledge to vouch for me."

And if Clinton is not the democratic nominee, wouldn't she be disappointed?

"Well, it will be me," she said. But she said she would stand behind any other Democratic nominee, if it came to that. "We're going to have unified party, behind whoever we nominate."