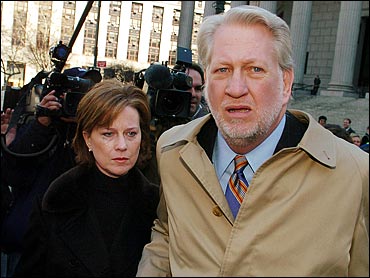 They called him the Telecom Cowboy, a darling of Wall Street who took a small long-distance company global by steering a snowballing set of mergers and acquisitions.

Now, Bernard Ebbers is the government's biggest catch since it began pursuing the largest corporate fraudsters three years ago. He could spend the rest of his life in federal prison.

The 63-year-old former CEO of WorldCom was convicted Tuesday of orchestrating the $11 billion fraud that sank the company in 2002, the biggest corporate fraud and bankruptcy in U.S. history.

As a jury forewoman read the verdict — guilty on all nine counts, including fraud and conspiracy — Ebbers' face reddened noticeably. His wife, seated in the front row, broke into tears.

Later, as his lawyer promised an appeal and predicted he would "ultimately be vindicated," Ebbers and his wife, nearly crushed by a phalanx of cameras, hailed a cab and sped away.

A judge set sentencing for June 13.

Attorney General Alberto Gonzales called the conviction a "triumph of our legal system." He said the jury had recognized the fraud "extended from the middle management levels of this company all the way to its top executive."

The verdict marked a colossal fall for Ebbers, who had turned a humble Mississippi long-distance firm into a global telecommunications power, swallowing up companies along the way and earning the nickname Telecom Cowboy.

In a six-week trial, prosecutors painted him as obsessed with keeping WorldCom's share price high, panicked about pressure he was getting over $400 million in personal loans that were backed by his own WorldCom stock.

"He was WorldCom, and WorldCom was Ebbers," prosecutor William Johnson told jurors. "He built the company. He ran it. Of course he directed this fraud."

The defense claimed all along that the fraud was masterminded by Sullivan, who testified as the star government witness and said Ebbers instructed him quarter after quarter to "hit our numbers" meet Wall Street expectations.

Ebbers himself took the witness stand at trial's end and flatly denied any role in the fraud. He said he viewed his role at the company as a visionary and cheerleader, was uncomfortable with accounting and left it to Sullivan.

According to CBS' Mason, in effect, Ebbers' claim was that he was above it all. In court, he even claimed, "I don't know about finance and accounting.

"He's never told me he made an (accounting) entry that wasn't right," Ebbers said of Sullivan. "If he had, we wouldn't be here today."

"This verdict blows that defense out of the sky," Frenkel said.

They were ushered away from the courthouse without speaking to the press, and Judge Barbara Jones instructed reporters not to badger them.

Legal experts said the appeal would be difficult. Weingarten said part of the case would center on prosecutors' refusal to grant immunity to three former WorldCom executives the defense wanted to call as witnesses.

"The jury took its time evaluating which former WorldCom official it wanted to believe," reports CBS News Legal Analyst Andrew Cohen. "Obviously, in this battle, jurors believed Sullivan and that's why Ebbers now may face the rest of his life in prison."

The nine criminal counts against Ebbers — securities fraud, conspiracy and seven counts of making false filings to the Securities and Exchange Commission — carry up to 85 years in prison. He will be free on bail until sentencing.

The conviction comes more than two years after an internal auditor began asking questions about curious accounting at WorldCom, touching off a scandal that eventually unearthed $11 billion in cooked books.

With the entire telecom industry suffering a dot-com hangover, the fraud was driven by soaring "line costs" — the fees WorldCom paid to smaller local telephone carriers to use their networks.

Besides Sullivan, three former WorldCom accounting officials who have pleaded guilty in the case testified they were pressured to cover up the expenses. Only Sullivan directly implicated Ebbers.

Ebbers still faces civil litigation, including from the company, which backed up his $400 million in personal loans when Bank of America demanded more and more collateral as the stock price fell.

The company struck a $750 million settlement with federal regulators to repay aggrieved investors, a small sum compared to the tens of billions of dollars of market capitalization that evaporated in the scandal.

WorldCom, which was based in Clinton, Miss., since re-emerged as MCI Inc., based in Ashburn, Va.

Twelve former directors of the company, plus some investment banks that underwrote WorldCom securities and auditing firm Arthur Andersen, also face a civil trial brought by angry investors. That trial is scheduled to get under way later this month.

In winning a conviction against Ebbers, federal prosecutors in Manhattan rang up another victory in a remarkable string of white-collar prosecutions that began in the summer of 2002.

The prosecutors have also wrung guilty pleas from countless other executives, including ImClone Systems founder Sam Waksal and five other former WorldCom officials who agreed to cooperate against Ebbers.

Sullivan and the three former WorldCom executives who have pleaded guilty in the case still face sentencing. They hope to win lighter prison terms — or none at all — by cooperating with the government against Ebbers.