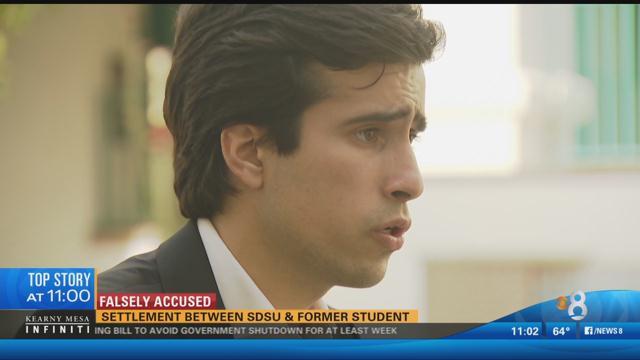 SAN DIEGO -- San Diego State University will pay $10,000 to settle a lawsuit by a foreign exchange student who said he was wrongly suspended and accused of sexual assault.

Campus police arrested Francisco Sousa in December 2014 for an alleged assault near campus. A campus-wide email announced the arrest.

The 23-year-old says the news flashed around the world, even to his hometown of Porto, Portugal. Charges were dropped the next month but the school didn't lift his suspension for eight months.

"I just want to go on with my life. My main objective was to exonerate and vindicate myself and I believe we were more than able to do that," he told CBS affiliate KFMB-TV.

Sousa told KFMB he purposely did not seek a large monetary settlement because it was more important to vindicate his name.

"No amount of money could correct what happened to me. I also do not believe the taxpayers should be responsible to pay for the misdeeds of San Diego State," he said.

Under the settlement, his arrest will be changed to a detention and the school will provide additional training to employees who investigate sexual assault claims.