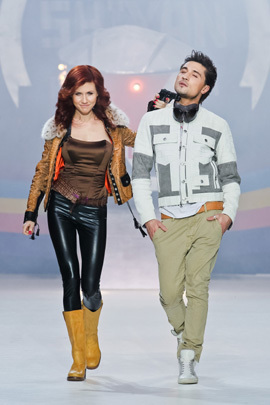 (CBS) Fashion Week in Moscow took a different turn when Anna Chapman, who was deported from the U.S. on charges of espionage, made a surprise appearance on the Russian catwalk.

According to the UK's Daily Mail, the gun was not a toy and very much a real weapon.  She reportedly dropped it when she made her debut on the catwalk.

The fashion shows in Moscow continued over a span of six days with top designers, including Yana Stasia, Dasha Gauser and Elena Souproun, showcasing their Fall/Winter 2011-2012 collections at the Congress Hall.

The season's designs encompassed everything from casual chic to classic silhouettes. Designers also embraced bright colors in many of their collections - a perfect match to the lively performances on the runway.