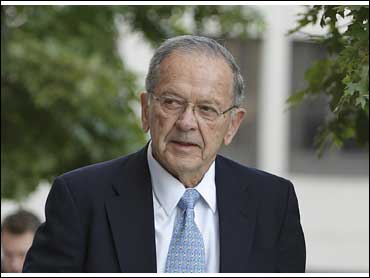 O'Keefe and his teenage son Kevin O'Keefe survived the crash with broken bones and other injuries, former NASA spokesman Glenn Malone said. The O'Keefes spent Monday night on the mountain with several volunteers who discovered the wreckage and tended to the injured until rescuers arrived Tuesday morning.

With its rugged terrain and foggy weather, Alaska accounts for 22 percent of all small plane crashes nationwide, according to National Transportation and Safety Board data from 2004, the latest year available, CBS News' Priya David Clemens reports from Los Angeles.

CBS News reports that the flag flying above the U.S. Capitol was lowered Tuesday evening to half-staff.

Stevens and O'Keefe are longtime fishing buddies who had been planning a trip near where the float plane crashed.

By Wednesday evening, officials said in a statement they had identified all nine passengers on the plane and notified the victims' next of kin.

The four survivors are William "Willy" Phillips Jr., 13; Sean O'Keefe, 54; Kevin O'Keefe; and Jim Morhard of Alexandria, Va. They were taken to an Anchorage hospital with varying degrees of injuries, officials said.

During a Tuesday evening press conference in Anchorage, NTSB Chairman Deborah Hersman told reporters that Smith, the pilot, had recorded about 29,000 hours of flight time when he last had a physical in December 2009. Hersman also said the plane he was flying was manufactured in 1957 but had undergone a mechanical overhaul in 2005.

The crash was a stunning event in a state where Stevens became the most beloved political figure in Alaska history during his 40 years in the Senate, earning a reputation as a tireless advocate for projects that brought millions of federal dollars to the state. He was 86.

"We have lost a tremendous husband and father and grandfather," the Stevens family said in a statement. "He loved Alaska with all his heart. He was a guiding light through Statehood and the development of the 49th State. Now that light is gone but the warmth and radiance of his life and his work will shine forever in the last frontier. His legacy is the 49th star on the American flag."

"Last night, Alaska lost a hero and I lost a dear friend," Alaska Sen. Lisa Murkowski said in a statement. "His entire life was dedicated to public service from his days as a pilot in World War II to his four decades of service in the United States Senate. He truly was the greatest of the Greatest Generation."

The plane crashed into a brush- and rock-covered mountainside sometime Monday night, authorities said. Volunteer pilots were dispatched to the area around 7 p.m. local time after the plane was found to be overdue at its destination, and they came upon the wreckage about a half hour later.

The weather soon took a turn for the worse, with heavy fog, clouds and rain blanketing the area and making it impossible for rescuers to arrive until after daybreak Tuesday. O'Keefe, his son, and two others were flown to the hospital.

The bodies of Stevens and the other four victims were transported to Anchorage, Hersman told reporters.

NTSB spokesman Ted Lopatkiewicz said the agency is sending a team to the crash site outside Dillingham, located in Bristol Bay about 325 miles southwest of Anchorage. The aircraft is a 1957 DeHavilland DHC-3T registered to Anchorage-based GCI.

The cause of the crash was not immediately known, but the flights at Dillingham are often perilous through the mountains, even in good weather.

Federal Aviation Administration spokesman Mike Fergus said the plane took off at 2 p.m. Monday from a GCI corporate site on Lake Nerka, heading to the Agulowak Lodge on Lake Aleknagik.

The lodge is made of logs and sits on a lake, and photos show a stately main lodge room with a large imposing stone fireplace, a leather sofa and a mounted caribou head on the wall.

Fergus said the plane was flying by visual flight rules, and was not required to file a flight plan.

Stevens was appointed to the Senate in 1968 and served longer than any other Republican in history. He was revered as a relentless advocate for Alaska's economic interests.

Stevens was one of two survivors in a 1978 plane crash at Anchorage International Airport that killed his wife, Ann, and several others. He remarried several years after the crash - he and his second wife, Catherine, have a daughter, Lily.

The airport in Anchorage is now named after Stevens.

"A decorated World War II veteran, Sen. Ted Stevens devoted his career to serving the people of Alaska and fighting for our men and women in uniform," President Obama said in a statement. "Michelle and I extend our condolences to the entire Stevens family and to the families of those who perished alongside Sen. Stevens in this terrible accident."

"Ted served our country with great distinction," President George W. Bush said in a statement. "We send our heartfelt condolences to the families of those who were lost, and we are praying for the health and well-being of the survivors."

Over the years, Stevens directed billions of dollars to Alaska.

But one of his projects - infamously known as the "Bridge to Nowhere" - became a symbol of pork-barrel spending in Congress and a target of taxpayer groups who challenged an appropriation for hundreds of millions of dollars for bridge construction in Ketchikan.

Stevens' standing in Alaska was toppled by corruption allegations and a federal trial in 2008. He was convicted of all seven counts - and narrowly lost his Senate seat to Democrat Mark Begich in the election the following week.

But five months after the election, Attorney General Eric Holder sought to dismiss the indictment against Stevens and not proceed with a new trial because of prosecutorial misconduct by federal prosecutors.

Plane crashes in Alaska are somewhat common because of the treacherous weather and mountainous terrain. Many parts of the state are not accessible by roads, forcing people to travel by air to reach their destinations.

Begich's father, Nick Begich, who was Alaska's only congressman in 1972, was killed when his plane disappeared over Alaska with then-House Majority Leader Hale Boggs of Louisiana.

The Stevens crash is the latest in a long line of aviation accidents to claim political figures over the years in the U.S., including Pennsylvania Sen. John Heinz in 1991, South Dakota Gov. George Mickelson in 1993, Missouri Gov. Mel Carnahan in 2000 and Minnesota Sen. Paul Wellstone in 2002.

O'Keefe, 54, was NASA administrator for three tumultuous years. He was deputy director of the Office of Management and Budget when President George W. Bush asked him in late 2001 to head NASA and help bring soaring space station costs under control.

But budget-cutting became secondary when the shuttle Columbia broke apart during re-entry on Feb. 1 2003.

O'Keefe was at the Kennedy Space Center runway that morning, waiting for Columbia to return to Earth, reports CBS News space analyst Bill Harwood. In an interview for the book "Comm Check: The Final Flight of Shuttle Columbia," O'Keefe recalled the scene at the landing strip when Columbia's crew failed to answer repeated calls from Houston.

William Readdy, a former shuttle commander and NASA's associate administrator for spaceflight, "got this really ashen look on his face and he said that this is too long between communications, this is not right," O'Keefe recalled. "And within, not any more than three to four minutes after that he ... started trembling a little bit and he said, 'we should have picked up the sonic booms by now. This is really long. This can't be right. This can't be right.'

"It was just one of those hit-you-with-a-mackerel kind of moments," O'Keefe said. "You know, 'Good God almighty.'"

O'Keefe's most controversial action at NASA was when he decided to cancel one last repair mission by astronauts to the Hubble Space Telescope. He said the mission was too risky. His successor overturned the decision. The Hubble mission was carried out last year.

O'Keefe left NASA in 2005 to become chancellor of Louisiana State University. He is now the CEO of defense contractor EADS North America and oversees the bid for the hotly contested Air Force refueling jet contract.

The contract competition, which pits EADS against rival plane maker Boeing Co., is for a piece of what could eventually be $100 billion worth of work replacing the military's fleet of aging tankers.