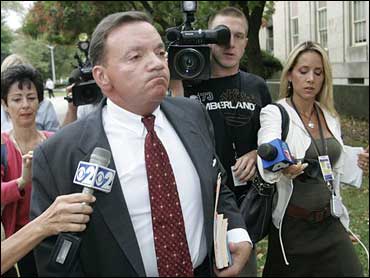 For years, ex-Roslyn schools chief Frank Tassone admitted, he stole millions of dollars in taxpayer money to finance everything from his breakfast bagel to European jaunts on the Concorde.

His next big journey on the taxpayers' dime will be to prison.

Tassone, 58, of Manhattan pleaded guilty Monday to first- and second-degree grand larceny before Nassau County Judge Alan Honorof in a scandal that state Comptroller Alan Hevesi has called "the largest, most remarkable, most extraordinary theft" from a school system in American history.

As part of a plea bargain, Tassone will spend four to 12 years in prison and pay back an estimated $2 million. If convicted at trial, he could have faced 25 years.

Four other people have been charged. Prosecutors have said they anticipate further arrests, and Tassone will cooperate in the continuing investigation as part of his plea deal, District Attorney Denis Dillon said.

About 50 district residents booed as Tassone entered the courtroom. Many, including former school board president William Costigan, said afterward they were dissatisfied with the penalty Tassone was promised.

"I think he should serve the maximum sentence," Costigan said, although he conceded he was glad to see Tassone "admit in open court that his actions had caused pain and suffering. ... We have become the poster boys for school scandals."

Speaking barely above a whisper, Tassone read an apology in court.

"I will make restitution to the Roslyn schools and I am sorry for my poor judgment," he said. "I only hope and pray that someday, the Roslyn community will remember the good I did for the district."

An audit by Hevesi earlier this year found that $11.2 million had been pilfered between 1996 and 2004, although prosecutors have been able to link slightly less than $7 million to the current defendants.

Sentencing was set for Nov. 29.

The fifth person accused is the district's former independent auditor, Andrew Miller, who prosecutors say helped cover up some of the pilfering. Dillon said Tassone provided information that led to the charges against Miller and suggested the probe "may lead to information on the 50 or more school districts that he audited across Long Island."

The $2 million taken by Tassone paid for flights aboard the Concorde for vacations in England, cruises, hotel and resort accommodations, dermatology treatments, furniture, jewelry and meals. More than $1 million allegedly was stolen via ATM cash advances, and prosecutors said the defendants even had their dry cleaning and cable TV bills picked up by taxpayers.

Records show that Tassone and a former school official withdrew the district's money from ATMs almost every day between February 2001 and October 2002, with Tassone taking out a monthly average of $21,747.

Tassone is the first of the defendants to settle criminal charges.

The schools in Roslyn, 20 miles from Manhattan, are among the best in the state. The district, where homes frequently sell for millions, sends 95 percent of its high school graduates to college, and SAT scores are among the nation's best.