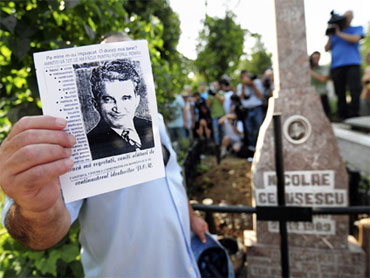 Taking the country by surprise, forensic scientists on Wednesday exhumed what are believed to be the bodies of Romanian dictator Nicolae Ceausescu and his wife Elena to solve the mystery of where they are truly buried.

Ceausescu ruled Romania for 25 years with an iron fist before being ousted and executed during the 1989 anti-communist revolt in which more than 1,000 people were killed.

Some Romanians doubt that the Ceausescus were really buried in the Ghencea military cemetery in west Bucharest - including the couple's children. There is also some nostalgia for the communist period and regrets that the couple were executed on Christmas Day, 1989.

The news of the exhumation, the latest development in a five-year court case, broke as most Romanians were asleep. Officials rapidly closed the cemetery as dozens of journalists began arriving. Journalists were barred from the exhumation but an Associated Press reporter managed to enter the cemetery while the operation was taking place.

A team of pathologists and cemetery officials hoisted the wooden caskets of Ceausescu and his wife out of their graves Wednesday. They then took samples from the corpses and put them into plastic bags - a process lasting more than two hours - before reburying the coffins.

Ceausescu's alleged remains were better preserved than those of his wife, said Mircea Oprean, the couple's son-in-law who was present at the exhumation.

"We are closer to knowing the truth," the couple's son Valentin Ceausescu, 62, told the AP by phone.

Officials say it will take up to six months to determine the identity of the remains.

Cemetery worker Cornel Muntean, who stood just yards from the exhumation, told the AP that Ceausescu was dressed in a thick gray overcoat. An AP reporter saw a dirty cloth being removed from Ceausescu's remains and what looked like a thick gray fur hat at one end of the coffin.

A few elderly people wandered around the sprawling cemetery but were kept away from the exhumations by guards.

Ceausescu was toppled Dec. 22, 1989, as Romanians fed up with years of draconian rationing and communist rule revolted. He tried to flee Bucharest by helicopter but his pilot switched sides. After a summary trial, Ceausescu and his wife were executed by a firing squad three days later.

Oprean's wife, Zoia Ceausescu, had sued the defense ministry in 2005, saying she had doubts that her parents were buried in the cemetery. She died of cancer in 2006 and her brother Valentin took up the case. The couple's other son Nicu died of liver cirrhosis in 1996 and is buried in the same Ghencea cemetery.

Romanians rose up in 1989 as other Communist regimes collapsed in Eastern Europe, angered and exhausted by years of rationing as the dictator tried to pay off the country's foreign debt. Meat, cooking oil and butter were severely limited and blackouts were common.

Ceausescu was also known for the fierce way he stifled dissent with his Securitate secret police, which were believed to have 700,000 informers in the nation of 22 million.

Aurel Chiubasu, 66, a former carpenter in a military unit, heard about the exhumation and rushed over to tend his wife's grave nearby.

"I didn't agree with him being executed but the family has the right to know where he was buried," he said. "People speak like it's not him there and he's buried somewhere else."

Another woman at the cemetery said her family had suffered dearly under Ceausescu's rule.

"My in-laws were thrown out of their homes like dogs and their properties were sold. My husband was a political prisoner," said Aurelia Fuica, tending marigolds and tugging weeds at the family grave yards from where Ceausescu is believed to be buried.

But she had no disagreement with Wednesday's operation.

"There is a mystery that needs to be solved," she said.