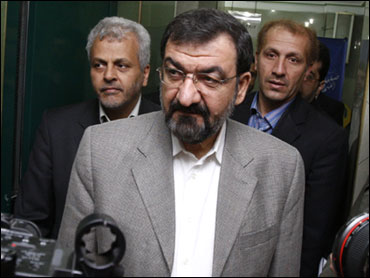 The sharp rebuke by Mohsen Rezaei - on the eve of Ahmadinejad's scheduled inauguration for a second term - also showed the broad scope of opposition to the crackdowns after the disputed June 12 elections.

Conservatives such as Rezaei have increasingly joined ranks with liberal factions to denounce the harsh tactics by Iran's leadership including sweeping arrests, media blackouts and attacks blamed for at least 30 deaths.

But Rezaei brings added weight as a former commander of the powerful Revolutionary Guard - which has led the backlash against groups claiming widespread fraud paved the way for Ahmadinejad's re-election.

In a letter to the head of Iran's judiciary, which is directly controlled by the ruling clerics, Rezaei said trials must be held for anyone linked to deadly attacks on the streets or torture of detainees. Among the dead is the son of one of Rezaei's top aides.

"Otherwise, justice will not be realized and it is possible that unrest will not end," said Rezaei, according to a report posted on his Web site.

The turmoil has complicated President Barack Obama's efforts to step up diplomatic engagement with Iran. The relationship became even trickier Saturday as Iranian state TV confirmed it has detained three Americans who crossed the border from northern Iraq a day earlier.

Kurdish officials said the two men and woman were tourists who had mistakenly crossed into Iranian territory Friday while hiking in a mountainous area near the resort town of Ahmed Awaa. One of the Americans was identified as Joshua Fattal, according to Kurdish officials and a statement from his family in Elkins Park, Pa.

"This case will be reviewed based on its natural trend," Iran's official IRNA news agency quoted the head of the parliament's foreign policy committee, Alaeddin Boroujerdi, as saying Sunday.

The Swiss Embassy in Tehran is working to learn more about the Americans' fate through its contacts with the Iranian Foreign Ministry, spokeswoman Nadine Olivieri said. Switzerland has represented U.S. interests in Iran since American diplomats were taken hostage at the embassy in Tehran 30 years ago, and the State Department asked the country to intervene in this case.

The trials of political activists began Saturday in the Revolutionary Court system, first used to sentence officials of the Western-backed monarchy that was toppled by the 1979 Islamic Revolutionary. 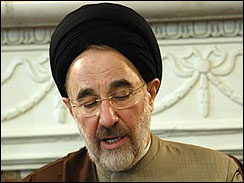 (AP Photo/Hasan Sarbakhshian)
The more than 100 defendants spanned nearly a dozen years of efforts to challenge Iran's Islamic systems: from supporters of opposition leader Mir Hossein Mousavi to several top allies of former President Mohammad Khatami (left), who began the openings for greater political and social freedoms with his election in 1997.

The blanket trial - on broad charges of trying to bring down the nation's political order - appeared part of an attempt by authorities to rattle and discredit the core of the reform movement in one blow.

Officials claim the opposition was a tool of foreign countries aiming to topple the Islamic state. State media quoted Mohammad Ali Abtahi, who served as Khatami's vice president, as "confessing" to working to foment unrest.

But rights groups have said such confessions are often obtained under duress in Iran. The trial was closed to all but state media.

Khatami called it a show trial to deflect attention from the "real crimes" carried out by authorities following the election.

The former president, who held office from 1997 to 2005 and is Mousavi's close ally, criticized the court for not allowing defense lawyers access to the courtroom or the case files.

"As far as I have learned, what happened in the trial was contrary to the constitution and law, as well as citizens' rights," said Khatami, according to a report posted on his Web site late Saturday.

Mousavi, in a statement on a pro-reform Web site, also called the proceedings a "theater" and demanded trials against "inquisitor and tortures ... who have played with the life of the reputation" of the country.

"What do they expect to convince people with?" the Web site reported Sunday. "A weak indictment based on confessions that share the tones of medieval torture."

The growing criticism came as Ahmadinejad prepared to officially begin his second four-year term. Iran's supreme leader, Ayatollah Ali Khamenei, is scheduled to officially endorse the president Monday and he is set to be sworn in before parliament on Wednesday.

Khamenei, who has the final say over all state matters, has supported Ahmadinejad in the election dispute. But the growing criticism about how the government has handled the crisis has compounded the biggest challenge the cleric-led system has faced since the Islamic Revolution.

There were no immediate calls for protests to coincide with the ceremony, but authorities strengthened security patrols in Tehran. 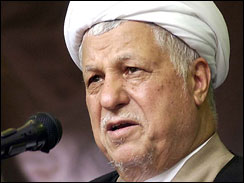 Rafsanjani has become a bitter political foe of Ahmadinejad and is believed to have raised questions about the election results among the ruling clerics.

At least 30 people were killed in the unrest that followed the election as hundreds of thousands of opposition supporters took to the streets to protest Ahmadinejad's victory, according to Iran's parliament. Human rights groups believe the number is likely far greater, and at least one person, Mohsen Rouhalamini, has died in detention.

Mohsen is the son of Rezaei's top aide, Abdolhossein Rouhalamini. He was arrested during a July 9 protest and taken to a hospital two weeks later where he died within hours. Reformist Web sites said his jaw was broken when his father received his body.

Hundreds of family members of detainees, including those on trial, gathered in front of the judiciary Sunday to express concern about their relatives, a reformist Web site reported.

The state Islamic Republic News Agency said a second session of the trial would be Thursday. Earlier, the semiofficial ISNA news agency said 10 suspects were in court Sunday. The reason for the discrepancy was not immediately clear.

State TV announced Sunday that it would broadcast the trial live if the judge agreed. The comments came in response to calls by hard-liners for such a move.
By Associated Press Writer Nasser Karimi