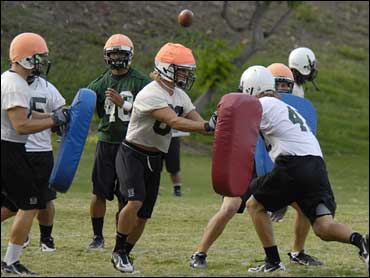 University of Hawaii athletic officials on Monday said they will look into allegations raised by a former receiver, including the claim that school officials and players manipulated NCAA-mandated drug tests.

Ian Sample, who recently published a book chronicling the 2006 season entitled, "Once A Warrior," released unpublished material on his blog about excessive drinking, widespread use of marijuana, sex with groupies and rigged drug tests.

Sample, who now plays professional football in Japan, wrote that he's "convinced the 'random' tests are not random at all."

"The higher ups definitely know what they are doing when they decide who will be tested," he wrote. "However, getting tested doesn't necessarily mean getting caught, every once in a while a player will side step a positive test result by flushing out their system (the real smokers know where to go to get a cleansing elixir)."

John McNamara, Hawaii's associate athletic director, said officials are reviewing and evaluating the content of the book and the Internet postings.

"Additionally, we will meet with the necessary parties and determine what steps, if any, need to be taken," he said in an e-mail.

He did not say when the meeting would take place.

"We don't have anything to do with it," he said, adding that the NCAA supplies a random lists of players, not the school.

"We have the greatest kids in the world at this campus," he said. "And it's just a shame that someone kind of threw them under the bus. It's the way that life is now. With the Internet, anybody can say anything they want."

Sample told the Honolulu Star-Bulletin that Jones is entitled to his opinion.

"But when he talks about throwing people under the bus, if he gets really bored one day and goes to the public library and reads the book, he might have some different thoughts," he said.

Sample, who had 54 catches for 690 yards and 10 touchdowns for Hawaii last season, wrote that when one of the random urine tests were conducted, "it's amazing that none of our valuable players are ever selected, especially the ones known for smoking weed."

"The players that are selected to go piss in a cup are the ones less valuable and the ones that have become a nuisance to coaches or the team," he wrote.

Sample's omitted passages were posted on his blog at myspace.com.

George Engebretson, of Watermark Publishing in Honolulu, said he decided not to include Sample's more controversial material in the book, even though it may have resulted in more sales.

"I had a certain vision what would be in this book and basically it would be a positive story about the UH football program and that's what we did," he said.

Engebretson wouldn't comment on Sample's possible motive to post the material on the Internet and said there are no plans of reprinting the book to include the omitted work.

"I don't think it really contributed to the story that Ian and I together wanted to tell," he said.

Sample wrote that marijuana was the drug of choice for the Warriors, but said he believed some players used steroids.

"Have people on the team taken steroids? Yes, they have," he wrote. "Sometimes it's obvious, you see someone improve over a couple months by leaps and bounds — we all know it's naturally impossible. I think it's known but not really talked about."

Sample said he has never known anyone caught taking steroids, but has known several players caught with marijuana in their system.

As for the boozing, Sample acknowledged times when he attended practices feeling drunk, along with other players who would drink on a regular basis.

Sample wrote about wild groupies, including one female who wanted him to wear his uniform during sex. He said groupies were readily available, including on campus.

Sample also claimed that people on and off the team would do schoolwork for money.

"If the money is right, and it always is, they will 'help' us write papers; anything from simple response papers to 20-page research papers," Sample wrote. "Their 'help' is unlimited and completely unassisted."

He said the entire team knows about the services.

"The best part is that some of the coaches know all about it," he wrote. "I've even heard coaches openly applaud their work."

The No. 23 Warriors open the season at home against Northern Colorado on Sept. 1.