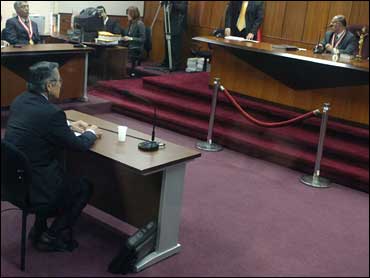 A Supreme Court judge convicted former President Alberto Fujimori of abuse of authority and sentenced him to six years in prison Tuesday, the first criminal conviction for Fujimori, who also faces human rights and corruption charges.

Supreme Court Justice Pedro Guillermo Urbina declared Fujimori guilty of abusing his power for ordering an illegal search as his government imploded in scandal seven years ago. He also fined Fujimori the equivalent of $135,000.

The former president was convicted of having a military aide pose as a prosecutor and search without a warrant the luxury apartment of the wife of his spy chief Vladimiro Montesinos in November 2000.

It was the first prison sentence handed down for Fujimori, 69, who ruled Peru from 1990 to 2000, before fleeing to Japan, his ancestral homeland, as his government collapsed. He faces three other trials on charges that include murder, kidnapping and corruption.

Fujimori showed little emotion during the hearing. After the sentence was read, Fujimori consulted quickly with his defense lawyer and then addressed the judge, saying he was appealing "partially" the sentence and the fine. He did not elaborate.

On Monday, an indignant Fujimori shouted his innocence and waved his arms in outrage as he went on trial in a separate case on charges he authorized an army death squad to kill leftist rebels and collaborators. He faces up to 30 years in prison if convicted for his alleged role in the killings, which came amid a government crackdown on a bloody Maoist insurgency.

"I received a country ... almost in collapse, exhausted by hyperinflation, international financial isolation and widespread terrorism," he said, his voice cracking with emotion.

"My government rescued the human rights of 25 million Peruvians with no exceptions. If any detestable acts were committed, I condemn them, but they were not done on my orders," he shouted angrily as the head of the three-judge panel called him to order.

The trial on the charge of abuse of authority was conducted in closed hearings before a single judge because it involved a minor charge. The trials are taking take place at the police base on the eastern outskirts of Lima where Fujimori is being held.

The search of the apartment of Montesinos' wife was conducted without a court order. Fujimori admitted ordering one of his military aides, an army officer, to pass himself off as a prosecutor during the search. All searches in Peru require a court order and the presence of a prosecutor.

Fujimori justified his action by saying it was part of a nationwide manhunt for Montesinos after Switzerland accused him of money laundering.

Fujimori's defense lawyer Cesar Nakazaki had asked the court for a reduced sentence of four years, arguing that Fujimori was not the one who committed the crime but was simply the "instigator." Judges normally suspend sentences of four years or less.

At the time of the search, only days before Fujimori fled Peru, the Interior Ministry said plainclothes police had seized some 40 suitcases and 40 boxes filled with videos, books and documents from the apartment of Montesinos' wife, Trinidad Becerra.

Several days later Fujimori called reporters to the Government Palace and showed them seven watches and two heavy gold chains, which he said were worth about $1 million. He said they had been seized during the search of Becerra's apartment.

Prosecutors said they suspected Fujimori was seeking evidence that might have implicated him in Montesinos' illegal activities, but he denied that.

After his trial for murder and kidnapping, Fujimori will have two more trials. In one he faces charges of illegally paying $15 million in state funds to Montesinos, now jailed and accused of dozens of crimes, to get him leave his post. In a fourth trial, he faces charges of bribing opposition congressmen, illegal wire tapping and misuse of state funds to buy a television station to support his re-election campaign.

Fujimori has said he is innocent of those charges.

He was extradited in September to Peru from Chile. He had flown there in 2005, taking Peruvian authorities by surprise, in the hope he would be extradited on minor charges, but the charges approved by Chile's Supreme Court included accusations of human rights violations.