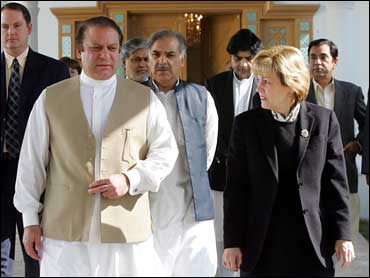 Opposition leaders Benazir Bhutto and Nawaz Sharif said Monday they would draw up a list of demands that authorities must fulfill to dissuade them from boycotting Pakistan's elections.

In a show of unity, the two former prime ministers said they agreed that the crucial Jan. 8 parliamentary elections would not be free and fair under current conditions. Pakistan has been under emergency rule for a month.

However, they stopped short of announcing an immediate boycott to protest U.S.-backed President Pervez Musharraf's continued rule and were vague on what their common demands would be.

"We reserve the right to boycott the elections at a later stage," Bhutto said at a joint news conference with Sharif after talks at her residence in the capital. "The ball will be in the court of the regime."

Sharif said he, like Bhutto, did not want to shun the vote, which the West hopes will produce a moderate government to keep this nuclear-armed nation stable as it battles rising Islamic militancy.

But he said: "This atmosphere doesn't seem to lead toward free and fair elections."

Sharif said a committee comprising four members each from their parties would draw up demands within the next few days. He said they would set a deadline for authorities to comply, but gave no indication how much time they would give.

Earlier Monday, a Pakistani election official rejected Sharif's nomination papers. Raja Qamaruz Zaman, a judge acting as the returning officer in the eastern city of Lahore, upheld objections from other candidates that Sharif was ineligible.

Former prime ministers Bhutto and Sharif both recently returned from exile ahead of the scheduled elections.

The two leaders were discussed the emergency, Musharraf's purge of the judiciary and the "rewriting of the constitution," said Farhatullah Babar, a spokesman for Bhutto's Pakistan Peoples Party, referring to the changes Musharraf made to the constitution using his emergency powers.

"The People's Party is of the view that the scene should not be left open to Pervez Musharraf's supporters," Babar said.

Sharif arrived in the capital on Monday afternoon from the eastern city of Lahore, his hometown and political stronghold.

About 3,000 people, many of them chanting "Prime Minister Nawaz Sharif," gathered at the airport in Islamabad to welcome him. He left the airport for the city in a long column of vehicles.

In Lahore, Sharif met with U.S. ambassador Anne Patterson. During a news conference, Patterson urged all opposition parties to take part in the elections.

Patterson reiterated U.S. calls for the lifting of curbs on the media and the freeing of all detainees.

But she refrained from calling for the reinstatement of Supreme Court justices, a key opposition demand, which Musharraf has repeatedly rejected.

"I have conveyed to the ambassador that restoration of the judges is a fundamental issue," Sharif said.

A boycott would be a serious blow to U.S.-backed efforts to return Pakistan to democracy after eight years of military rule. Musharraf has promised to lift the emergency - as demanded by Washington and the opposition - on Dec. 16.

On Monday, Musharraf urged the opposition to help the nation through a difficult transition to democracy.

"The political leaders have to keep Pakistan's interest first and not focus on their narrow interests," Musharraf said during a news conference with visiting Turkish President Abdullah Gul.

Gul is due to meet later with opposition leaders.

Bhutto, who at the weekend kicked off her electoral campaign in the northwestern city of Peshawar, promised to use both economic and military means to fight pro-Taliban militants in Pakistan's tribal regions along the Afghan border.

Bhutto warned that "foreign forces" - a reference to American and NATO forces operating in Afghanistan - could invade unless the government wrests the region from the militants.

Bhutto herself has drawn flak in Pakistan for saying she would cooperate with the U.S. in targeting Osama bin Laden if Pakistan cannot do it alone.

Meanwhile, a bomb exploded inside an Islamic school in southwestern Pakistan on Monday, killing six students and wounding four others, officials said.

The explosion ripped through the school in Qilla Saifullah, a town about 90 miles north of Quetta, the capital of Baluchistan province, police official Mohammed Farooq said.

The bomb exploded in a room soon after an Afghan refugee, who stayed there for the night as a guest, had left, Farooq said.

Four students were killed at the scene while two died later. Four were wounded, Farooq said.

The province is also beleaguered by a low-level insurgency in which ethnic Baluch rebels are seeking greater autonomy and control over resources such as rich gas reserves.

Manzoor Hussain, police chief in Qilla Saifullah, said it was unclear if the explosion was linked to either conflict.