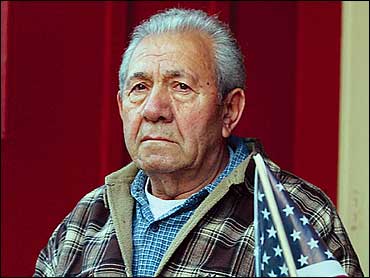 A Wisconsin man who took part in the massacre of 8,000 Jews during World War II was deported to Austria, government officials said Thursday.

Former Nazi concentration camp guard Josias Kumpf, 83, admittedly participated in a mass shooting at a Polish labor camp that left 8,000 Jewish prisoners - including 400 children - dead in 1943, according to Immigration and Justice Department officials.

During World War II, Kumpf served as an armed guard at Trawniki labor camp in Poland. He also served at a concentration camp in Germany as well as a slave labor site in France where prisoners built launching platforms for German missile attacks on England, the government said.

Kumpf's court-ordered removal from the U.S. "is another milestone in the government's long-running effort to ensure that individuals who participated in crimes against humanity do not find sanctuary in this country," said Acting Assistant Attorney General Rita M. Glavin.

The Trawniki shootings were part of "Aktion Erntfefest," or Operation Harvest Festival, which ended in the deaths of around 42,000 Jews in Poland, officials said.

The Serbian-born Kumpf said he was tasked with watching for victims who were still "halfway alive" or "convulsing" and prevent their escape, according to officials. If they tried to escape, he was to shoot them.

Kumpf arrived in the U.S. in 1956 and became a citizen eight years later. A U.S. District Court revoked his citizenship in 2005 after the government brought a suit against him. His deportation was ordered by a judge and carried out by Immigration and Customs Enforcement.

In a 2003 interview, Kumpf said he was taken from his home in Yugoslavia as a 17-year-old and forced to serve as a guard, but he didn't participate in any atrocities.

At a 2006 hearing Rogers described Kumpf as "a gentleman who was involuntarily inscripted into the army, assigned to the SS and then stationed at places where admittedly terrible things happened. My client never took part in them."

But at a subsequent deportation hearing, Acting Assistant Attorney General Matthew Friedrich said Kumpf participated in an operation that resulted in the murder of thousands of innocent victims.

"His culpability in this atrocity does not diminish with the passage of time," Friedrich said at the time.

Since 1979, the U.S. Justice Department has won cases against 107 people who participated in Nazi crimes.