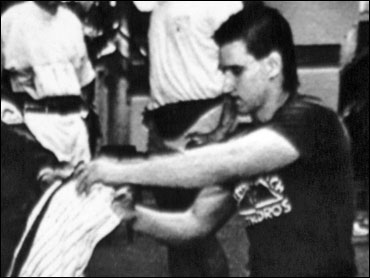 Kirk Radomski, who pleaded guilty in U.S. District Court in April to felony charges of distributing steroids and laundering money, met recently with former Senate Majority Leader George Mitchell, according to the report. He faces up to 25 years in prison and a $500,000 fine at his sentencing, scheduled for Sept. 7.

As part of the plea deal, Radomski agreed to testify before a grand jury, if needed, and to meet with investigators from baseball's own steroids investigation.

SI.com did not say when Radomski met with Mitchell. But it said the meeting may have occurred before July 13 when Yankees slugger Jason Giambi became the one current major leaguer to cooperate in the investigation.

It remains to be seen whether Mitchell would reveal names uncovered in his investigation, which may be presented sometime after this baseball season.

Radomski worked for the Mets for a decade, beginning in 1985, then used the contacts he made to go into business selling steroids and other drugs to ballplayers, according to his signed plea agreement.

"We are encouraged that the U.S. Attorney has insisted Mr. Radomski cooperate with Senator George Mitchell's investigation as a condition of the plea agreement," MLB president Bob DuPuy said at the time.

According to court documents, Radomski became a major source of drugs for baseball players after federal investigators shut down the Bay Area Laboratory Co-Operative in Burlingame, Calif., the center of a massive drug distribution ring shut down by federal authorities in 2003.

Radomski used the money to pay the mortgage on his home, which served as his base of operations. He made the deposits to a New York-based bank and sold steroids in person, over the phone and by mail, according to the agreement.

An FBI informant told federal agents about Radomski, the documents show. And on Dec. 7, 2005, the documents show, he received an order for steroids from someone in San Jose, Calif., he believed was a friend of an earlier customer. He shipped two vials of deca-durabolin, an anabolic steroid, and testosterone to that address.