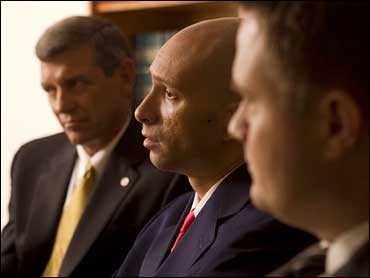 A former Marine sergeant facing the first federal civilian prosecution of a military member accused of a war crime says there is much more at stake than his claim of innocence on charges that he killed unarmed detainees in Fallujah, Iraq.

In the view of Jose Luis Nazario Jr., U.S. troops may begin to question whether they will be prosecuted by civilians for doing what their military superiors taught them to do in battle.

Nazario is the first military service member who has completed his duty to be brought to trial under a law that allows the government to prosecute defense contractors, military dependents and those no longer in the military who commit crimes outside the United States.

"They train us, and they expect us to rely back on that training. Then when we use that training, they prosecute us for it?" Nazario said during an interview Saturday with The Associated Press.

"I didn't do anything wrong. I don't think I should be the first tried like this," said Nazario, whose trial begins Tuesday in Riverside, east of Los Angeles.

If Nazario, 28, is convicted of voluntary manslaughter, some predict damaging consequences on the battlefield.

"This boils down to one thing in my mind: Are we going to allow civilian juries to Monday-morning-quarterback military decisions?" said Nazario's attorney, Kevin McDermott.

Others say the law closes a loophole that allowed former military service members to slip beyond the reach of prosecution. Once they complete their terms, troops cannot be prosecuted in military court.

Scott Silliman, a law professor and executive director of the Center on Law, Ethics and National Security at Duke University, says it has little to do with questioning military decisions and everything to do with whether a service member committed a crime.

"From a legal point of view, there is no difference in law between war and peace," he said.

The Military Extraterritorial Jurisdiction Act law was written in 2000 and amended in 2004 primarily to prosecute civilian contractors who commit crimes while working for the U.S. overseas. One of the authors contends prosecuting former military personnel was "not the motivation."

"I don't fault the Department of Justice for using what legal authority they have if a clear criminal act has been committed. But I do think that it would be preferable for crimes committed on active duty be prosecuted by court martial rather than in civilian courts," said Sen. Jeff Sessions, an Alabama Republican.

"I think maybe what it says is we need to rethink the question of military personnel who are subject to prosecution."

Telephone messages for a spokesman in the U.S. attorney's office in Los Angeles seeking comment were not returned.

Nazario, of Riverside, is charged with one count of voluntary manslaughter on suspicion of killing or causing others to kill four unarmed detainees in November 2004 in Fallujah, during some of the fiercest fighting of the war. He also faces one count of assault with a deadly weapon and one count of discharging a firearm during a crime of violence.

If convicted of all charges, he could face more than 10 years in prison.

The case came to light in 2006, when Nazario's former squadmate, Sgt. Ryan Weemer, volunteered details to a U.S. Secret Service job interviewer during a lie-detector screening that included a question about the most serious crime he ever committed. Weemer was ordered this month to stand trial in military court on charges of unpremeditated murder and dereliction of duty in the killing of an unarmed detainee in Fallujah. He has pleaded not guilty.

According to a Naval Criminal Investigative Service criminal complaint, several Marines allege Nazario shot two Iraqi men who had been detained while his squad searched a house. The complaint claims four Iraqi men were killed during the action.

The complaint states the squad had been taking fire from the house. After the troops entered the building and captured the insurgents, Nazario placed a call on his radio.

"Nazario said that he was asked, 'Are they dead yet?"' the complaint states. When Nazario responded that that the captives were still alive, he was allegedly told by the Marine on the radio to "make it happen."

Though Nazario and his attorneys declined to discuss the facts of the case with the AP, the former Marine has always maintained his innocence.

Fallujah was the scene of two Marine battles in 2004, the first of which was launched after insurgents killed four U.S. contractors in the city. That battle was aborted in April 2004, and the Marines launched Operation Phantom Fury in November of that year.

Nazario said he was on his first deployment when his squad entered Fallujah, which he described as a "high combat zone" with insurgents taking shots at troops at every turn - with everything from AK-47s to rocket-propelled grenades.

Thirty-three in his battalion were killed in the battle. The first, he said, was a man in his squad. Nazario later received the Navy-Marine Corps Commendation Medal with a "V" for valor for combat and leadership in Fallujah.

Though Nazario was not physically injured, he was later found to have post-traumatic stress disorder.

After leaving the military, Nazario worked as an officer with the Riverside Police Department and was close to completing his one-year probation. He said he knew nothing of the investigation until he was arrested Aug. 7, 2007, after being called into the watch commander's office to sign a performance review.

He said he was leaning forward to sign when he was grabbed from behind by his fellow officers, told he had been charged with a war crime and was turned over to Navy investigators waiting in a nearby room. Because he had not completed probation, the police department fired him.

Since then, he said, he has been unable to find work.

"You're supposed to be innocent until proven guilty," he said. "I've put in applications everywhere for everything. But nobody wants to hire you if you have been indicted."

Without any income, Nazario said, he has been forced to move in with his parents in New York. He and his wife resorted to selling some of their household goods, such as electronics equipment, to a pawn shop.

His wife, once a stay-at-home mother to their 2-year-old son, has gone to work as a customer service receptionist, he said. She will be unable to attend his trial.

"She has to work. We need the money," he said, his eyes reddening as he blinked away tears.

"My faith in the system is shaken. There's no doubt about that," he said.

One of Nazario's defense attorneys, Doug Applegate, said he believes that ultimately the former Marine will be acquitted because of lack of evidence.

"There are no bodies, no forensic evidence, no crime scene and no identities," he said.

It is unclear what, if anything, Marines being subpoenaed to testify will say about the events in the house in Fallujah.

Another Marine, Sgt. Jermaine Nelson, 26, of New York is slated to be court-martialed in December on charges of unpremeditated murder and dereliction of duty for his role in the deaths.

Although he has not entered a plea in military court, Nelson's attorney has said his client is innocent.

Nelson and Weemer were jailed in June for contempt of court for refusing to testify against Nazario before a federal grand jury believed to be investigating the case. Both were released July 3 and returned to Camp Pendleton.